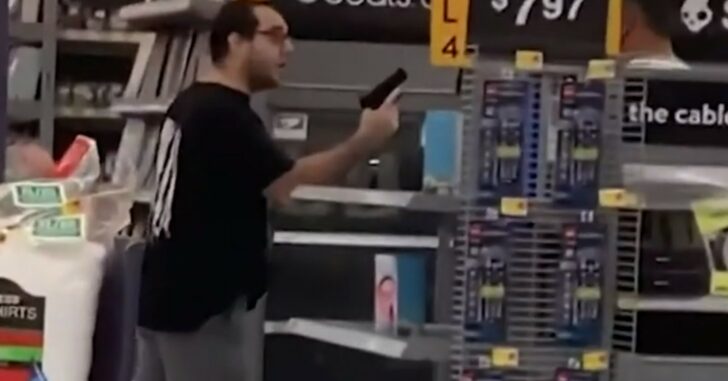 ROYAL PALM BEACH, FLORIDA — 2020 is definitely shaping up to be a year of epic proportion. Today’s topic: FL man without mask pulls gun on FL man with mask, after with-mask-man confronts without-mask-man.

In a few days time, Walmart will require all shoppers to wear masks, and obviously some people are passionate about this topic.

Police released the photos on their Facebook page in hopes that the person could be identified. They have since updated the post to say that they’ve made an identification and according to ClickOrlando.com, have been in contact with him and he was cooperating.

Just by looking at the video and the information provided, this drawing of a firearm was completely unwarranted and irresponsible. Gun owners have a responsibility to behave properly and legally with their firearms, and this isn’t it.

Just yesterday, a man in Michigan was shot dead by a deputy after he stabbed a 77-year-old man inside a grocery store after a confrontation about not wearing a mask.

The 77-year-old is said to be in serious condition at the hospital.