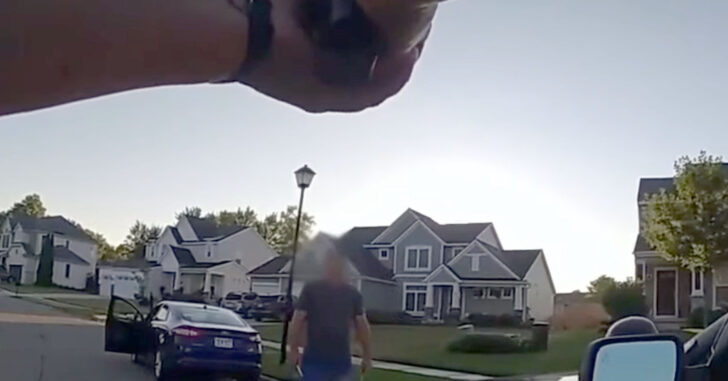 Welcome to 2020, where people will literally attack you with a knife over a mask. Placing bets on what August brings.

The incident began at the Quality Dairy located on 7120 Lansing Road in Dimondale when Michigan State Police said a masked man from Lansing, 77, and an unmasked man from Grand Ledge, Sean Ruis, 43, got into an altercation regarding wearing masks.

Police said the customer, Ruis, who was not wearing a mask was refused service by the store.

So far, we have an argument. Nothing to see here. If you really want to vent, do so in a polite manner and move on with your day.

That’s not where this one ended. Far from it.

Ruis began threatening everyone inside the store, and eventually turned on the 77-year-old, stabbing him with a knife.

He then got in his car and fled the scene, but one officer was able to find his vehicle after 911 calls about what had happened. After getting pulled over, Ruis exited his vehicle with knives (and screwdriver) in hand. He began advancing on the deputy after dismissing verbal commands that she was giving.

The deputy, a 22-year veteran, attempted to increase distance by backing up and “subsequently shot and injured” Ruis who was taken to the hospital and died during surgery.

Video from the incident has been released.

If you listen closely, the deputy is heard firing at least 6 shots before Ruis stopped advancing on her. Being that close to a person with a knife is a dangerous thing, and the deputy absolutely did the right thing.

Previous article: Man Is Shot And Killed Trying To Break Into Home After Stabbing A Woman At The Same Location Earlier That Day Next article: [REVIEW] Essential Holsters Naked Holster: A Total Shock And Not At All What I Was Expecting