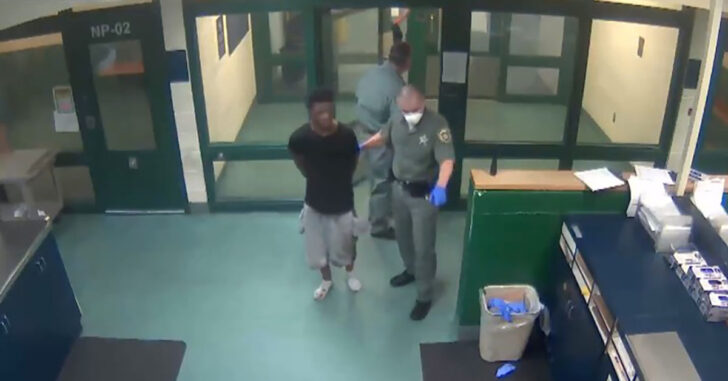 TAMPA, FLORIDA — With jails and prisons across the Country letting non-violent prisoners out early, due to coronavirus concerns, citizens have had some things to say about these actions.

One ‘non-violent’ inmate released, 26-year-old Joseph Edwards Williams, was picked up just a day after being released. For murder.

They say he is connected to a March 20 shooting homicide in the Progress Village area. Deputies responded at 10:40 that night to several 911 calls about gunshots fired near 81st Street South and Ash Avenue. A man was pronounced dead at the scene.

In total, 164 non-violent prisoners were released by the Hillsborough County Sheriff’s Office.

Williams was originally being held after he was arrested on March 13 for possession of heroin and possession of drug paraphernalia.

New video of murder suspect Joseph Williams being booked in jail from @HCSOSheriff. He's one of the inmates released last month per an order signed by a judge to reduce risk of #COVID19 outbreak in jail. Notice the deputies are wearing masks/gloves. @WFLA https://t.co/LCMjYhlbgg pic.twitter.com/LjROJzoKVV

“There is no question Joseph Williams took advantage of this health emergency to commit crimes while he was out of jail awaiting resolution of a low-level, non-violent offense,” Sheriff Chad Chronister said. “As a result, I call on the State Attorney to prosecute this defendant to the fullest extent of the law.”

A few days ago, we covered another story where a man released early went on to break into a woman’s home. He tied her up, threatened to kill her, but was luckily arrested on the scene by officers.

And don’t forget about the Level 3 sex offenders released in New York.

Previous article: The Best Home Defense Pistol Of All Time Is... Next article: Armed Defender Manages Two Head Shots While Being Chased By Armed Robbers On Motorcycle *WATCH*