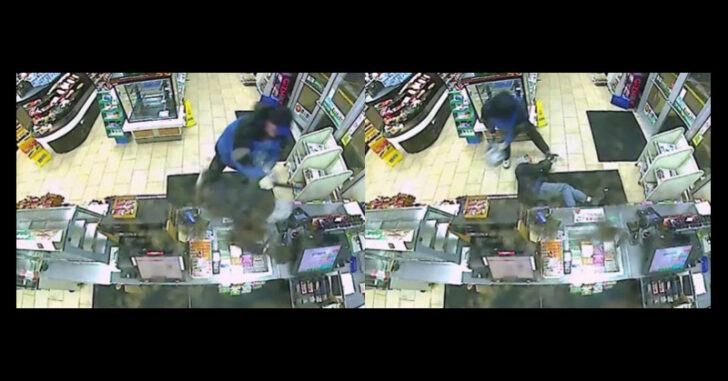 TOWN OF TONAWANDA, NEW YORK — One late night in a convenience store in Tonawanda, a middle-aged man came in and pointed a gun at the clerk.  It’s a story that plays out the usual way too many times across America.  But it’s New York, so concealed carriers are far and few inbetween.  So, when bad guys rear their ugly head, thankfully there was a brave customer willing to do the work that should have been done by a good guy with a gun.  KOIN 6 reports that an unnamed customer approached Robert M. Samson, 59, from behind with a large flashlight.  Go MagLite, right?

As is plain to see from the surveillance video, the armed robber doesn’t last long.  Apparently, he missed all our articles on situational awareness… Something we don’t mind one bit.

This could have turned bad but it thankfully didn’t.  The clerk was fine.  No shots were fired.  And the bad guy was pretty much taken down.  According to KOIN 6, Samson managed to escape and hid in his attic until police arrived to take him away.

See, the thing about carrying an illegal gun and using it to commit a felony — especially in the State of New York — that a BIG felony.  Samson is being held on on a $75,000 bail.  As for the good guy in the video, it’s unknown what became of him or if he got any recognition.  Chances are good, he was just glad to be in the right place, at the right time, with the right equipment.

For all of us, though, it’s just a reminder to always be carrying.

Previous article: BREAKING: Police Officer Shooting In Philadelphia Carried Out "In The Name Of The Islamic State" Next article: Police Force Shrinks, Violent Crime Surges In The Capitol -- Time For Concealed Carry, Yet?