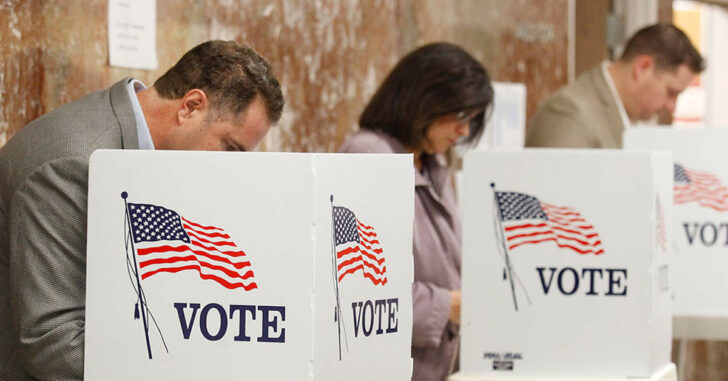 This is a big election, folks. As concealed carriers and gun owners, we’re literally voting on our nation’s future with a prosperous Second Amendment intact. But, come November 8th, you may be forced to go into a place that specifically prohibits the carrying of a firearm — concealed or otherwise.

There are six states that have laws against carrying firearms into the polling station. They are Arizona, California, Florida, Georgia, Louisiana and Texas.

Arizona — Not On Election Day

In Arizona, the Arizona Department of Public Safety specifically warns gun owners to not carry their firearms onto the premises of a polling place. Peace officers exempt. The Election Code, Section 18544 specifically states that anyone in possession of a firearm — whether he be a peace officer or private citizen — may be charged with a crime if he does not have express written permission from whichever city or county officials are preciding over the election.

Florida’s concealed carry permit does not give a person the right to carry into a polling place. This is laid out in “Title XLVI (Crimes), Chapter 790 (Weapons and Firearms), Section 790.06 License to carry concealed weapon or firearm.”

Georgia — Not With A Ten Foot Pole!

Carrying a firearm into a polling place is against the law in Louisiana. The Lousiana State Police answer that question in their own FAQ. It doesn’t matter whether or not you have a concealed handgun permit — it’s a no.

The Texas Department of Public Safety specifically lays out the law in the penal code that prohibit you from carrying a firearm into a polling station.

Check Your State And Local Laws

Even if your state doesn’t specifically have laws against carrying a firearm into a polling place, check with your local and county laws where applicable.

Go out there on November 8th and do your civic duty! There’s a lot more than just the Presidential Election. Your local representation is crucial. Your state reps and senators can play a pivotal role in either upholding your right to carry or make it a hell of a lot more prohibitive.

We need every single American out there this election. It’s not just the next president — it’s everything.

**Always check with State and Local laws before carrying your firearm into a polling place.