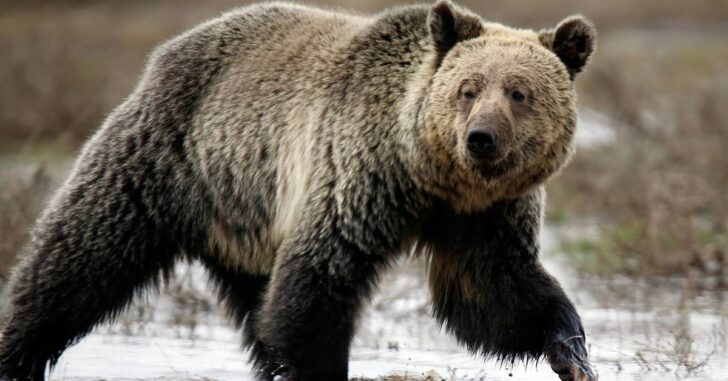 BILLINGS, MT — A hunter was forced to shoot and kill a grizzly bear mother after accidentally stumbling upon her and her cub while hunting late last month, The Associated Press reports via The Seattle Times.

Unfortunately, the cub was wounded as well, and was later euthanized.

As the Associated Press reports via The Seattle Times:

Wildlife officials say a hunter along Montana’s Rocky Mountain Front shot and killed a female grizzly bear and wounded a cub that was later euthanized.

Grizzlies are protected in the Lower 48 states as a threatened species. Investigators determined the hunter acted in self-defense, meaning he won’t face charges. Montana Fish, Wildlife and Parks spokesman Greg Lemon said the bow hunter was in thick brush along a creek on Wednesday when he came across the animals at the Blackleaf Wildlife Management Area northwest of Choteau.

The hunter shot the animals with a pistol, killing the adult and injuring the 2-year-old cub, which was later killed by officials due to its injuries. Earlier this week, a bow hunter on the Blackfeet Indian Reservation shot and killed a grizzly that attacked him.

One of the most common things I have seen debated on gun websites, forums, and blogs is what to do to counter bears while hunting.

Now, obviously this is a topic that depends entirely on the type of bear that you might encounter in your area. For myself, based out of North Carolina, I hunt with a Ruger American Ranch in 7.62×39. That in itself would likely be plenty for all but the biggest of bears, but I carry an old Taurus Tracker in .357 magnum for good measure as well.

But again — I’m from North Carolina. If I run into something, we’re talking black bears. Not grizzlies.

I have read reports (which I will be writing about to a greater extent shortly) in which even 9mm has been used to stop a grizzly attack — I wouldn’t recommend it, but you use what you gotta use.

For my money, if you’re going into Big Bear country, get bear spray and carry something no smaller than .45LC or .44 Magnum, but most importantly practice with what you’re going to use, and if you have to use it, use it well.

Previous article: *GRAPHIC* FL City Commissioner Fatally Shoots Thief, Internet Is Blowing Up With Objection To His Actions Next article: Handguns for Bear Defense: a Study by Caliber