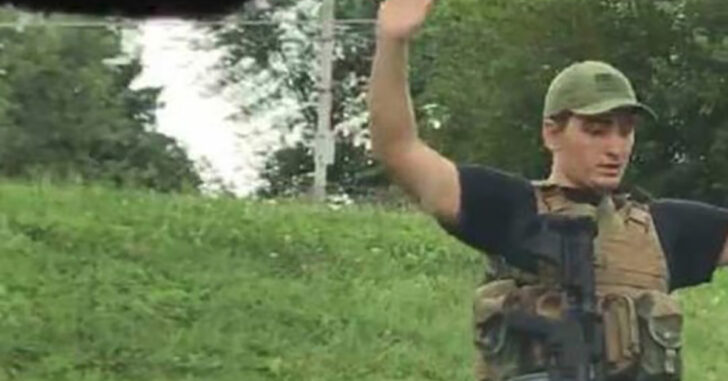 20 year old Dmitriy Andreychenko is facing a charge of making terroristic threats after going into a Walmart armed, wearing body armor, and recording any potential reactions by employees. His stunt came just a few days after 22 people were shot dead at a Walmart in El Paso, Texas.

Now, it’s being reported that he told police he was doing it as a social experiment, to see if Walmart supported gun rights.

“He is a God-fearing man, who just decided to make a bad decision that could ruin his life, but I pray that it doesn’t.” said Anastasia Andreychenko, Dmitriy’s younger sister. She said he had called her just after 3pm on Thursday, asking her to help with his social experiment.

“He asked me if I would go in and record him,” said Anastasia. “He said he wanted to see if the manager at Walmart would ask [him] to leave, even though he was doing everything legally. He said he was going to go in with his weapon and shop.”

Both his wife and his sister told him that idea was a foolish one. Apparently, he didn’t listen.

“Obviously people are going to be on their toes after something that just happened like that,” said Angelica Andreychenko, Dmitriy’s wife. “Especially with that kind of whatever he had on and his gun. I don’t know why he would be… especially the timing, the timing was so bad.”

After his arrest, police say Andreychenko told them he “Wanted to know if that [sic] Walmart honored the 2nd amendment.” And said he filmed himself in case somebody was going to stop him and tell him to leave.

The end result was a Walmart filled with panicked shoppers, a manager pulling the fire alarm and telling everyone to get out, and Mr. Andreychenko being held at gunpoint by an off-duty firefighter who was carrying a concealed firearm.

While there may have not been any criminal intent, we still have to ask the question; Was this really a smart move? Is this truly the best way to demonstrate something that is supposed to be pro-gun? Or, does it hurt the cause and create unnecessary chaos in the wake of a mass shooting at another Walmart?

It’s such a tricky scenario, because his carrying of the firearms was not illegal in the slightest. Missouri is a constitutional carry state as well as open carry. Not only did he put himself in danger, he put the off-duty firefighter in danger as well.

What if the firefighter had shot him? To him, it was most likely a very real threat, probably mostly considering the recent events in this Country. Would a DA prosecute? Who knows, but man… what a situation to put someone in.