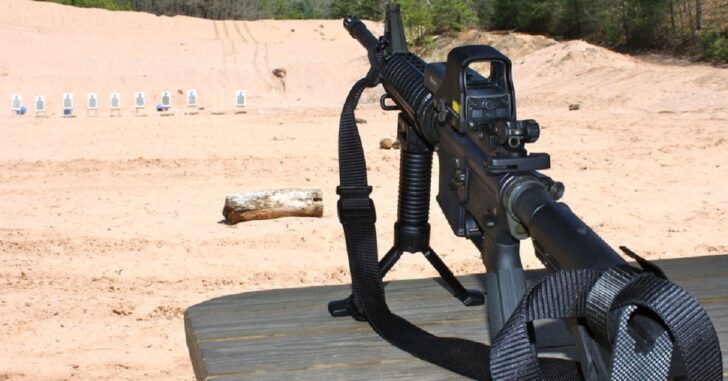 HAIKU, HI — When a trio of robbers attempted to make a quick buck by pillaging a Hawaii home, they got some money — but they also barely missed out on a bullet wound by an armed occupant.

Multiple rounds were fired in the incident, but no one was hurt.

As the Honolulu Star Advertiser reports:

Police responded to a report of shots fired at a Haiku home at about 10:35 p.m. Thursday and found three adult victims who said three males wearing hooded sweatshirts entered their home with one of them brandishing a shiny handgun.

The bandits forced one victim into a bathroom, then walked through the house. A second victim armed himself with an AR-15 rifle and fired a round at the robbers, nearly striking one. The three suspects fled, firing four gunshots on the way out. No one was hurt during the robbery, police said. One victim reported the suspects took $3,000.

Now, right off the bat we need to commend one of the intended victims in this home invasion for owning an AR-15 in one of the least gun-friendly states in the union. It’s always good to see.

There’s a piece of this story that we can examine as it applies to self-defense law, or even just good form, when considering a retreating attacker — these guys were absolutely fair game as they were running off, as long as the possessor of the AR platform knew what he was aiming at and what was behind his target.

All too often, we see folks firing at retreating thugs after they have ceased to become a threat — even sometimes not even bothering to open fire until they started to run away. You can’t do that, even if you really want to.

However, in this case the exact opposite has happened. These three losers realize that they have something approaching a fair fight and run as quick as they can, firing as they flee.

If they’re firing as they flee, they’re insisting on remaining a threat.

I’m glad the intended victim didn’t get hurt because of his restraint — hopefully he’ll never have to make that judgment call again.