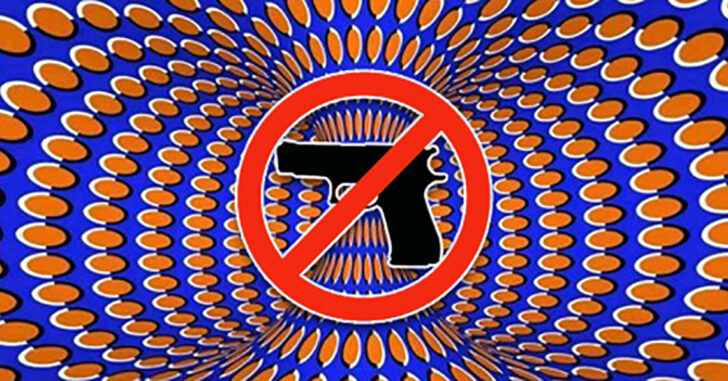 Let’s start off by saying this: I am not necessarily here to win a fight. I am writing this article based on statistics and common sense, and hope that you do your own research into this very important topic. Talking with friends and relatives about this will open the door to healthy debate — a debate that will hopefully spread and move forward in the right directions.

I have a really hard time with the concept of ‘Gun Free Zones’. It’s not even because I carry, it just simply doesn’t make any sense to me. Criminals, by definition, don’t follow the law. What makes lawmakers believe that they’ll follow this one. Allowing people, law abiding Americans, to carry firearms in these ‘Gun Free Zones’ (that they are already carrying everywhere else), doesn’t sound like a disaster waiting to happen to me. It actually makes perfect sense.

Let’s put this into some honest perspective.

Laws are put in place to deter people from doing things that they shouldn’t be doing. If they break a law, they face fines and/or jail time.

We all understand that, and it makes sense. However, here is where I get lost…

‘Gun Free Zones’ are in place to deter people from shooting other people in those areas. Statistics show us that when a person commits a mass shooting, they usually go into it believing that they will not come out alive. This is a huge issue, because regardless of the laws on the books, they do not apply in this situation. Why do they not apply you ask? Sure, you can argue “Well if he does make it out alive, then justice will be served”. However it still does not change the fact that the shooter went into it as a suicide mission. Their last concern on earth is whether or not they are breaking any laws, and many of them (if not the majority) do not survive.

Let’s start with this statistic: Law-abiding gun owners use their firearms to defend themselves against criminals an estimated 2.5 million times per year, or 6,850 times each day. Of this number, less than 8% will kill or wound their attacker. The mere presence of the firearm is usually enough to stop the crime in progress. Those are impressive numbers (Source). Here is a collection of videos that show law-abiding citizens defending themselves on a daily basis.

There are examples (that sadly don’t make national news) that show people stopping a potential mass shooting with their concealed firearm. A perfect example happened at the end of 2012 at a mall in Oregon. 22 year old Nick Meli, with a concealed firearm, happened to be in a mall with his friend and her baby. While they were there, a man came into the mall, took out his rifle, and started shooting. He started targeting people and ended up killing two. Nick  took cover and drew his firearm and pointed it at the armed man. Once the shooter saw Nick had drawn a firearm on him, the last shot from his rifle went into his own head. Once he realized that he was up against an armed individual, he knew his killing spree was over. Who knows how many lives Nick saved that day, and he didn’t have to fire a single shot. Watch the video here.

There are many other examples, and even countless others that don’t make the news. Did you know that, during the Aurora Colorado movie theater shooting, there was a member of the audience carrying a concealed firearm? This person however, made the decision not to shoot in fear of accidentally hitting an innocent person. I can’t fault him for this decision because I wasn’t there. If anyone tells you how they would react in an active shooting situation, they’re lying. You’ll never know until it happens.

With that said, I strongly feel that education, training and CARRYING will help deter crimes like these (and many others) from happening as frequently as they do. As part of a study some years ago, criminals in jail and prison were polled and asked what deterred them from committing crimes in the past. Their #1 response was this: “I knew or had a feeling that the person was armed”. I can guarantee this; if, let’s say…50% of the American public were legally armed, crime rates would drop DRAMATICALLY just for the simple fact that criminals would know they would have a very high chance of encountering an armed citizen. That’s quite the deterrent, don’t you agree?

I’m glad you asked. First, there is no such thing as an ‘accidental discharge’. They’re negligent discharges, plain and simple. Training and proper care are essential to safety. Any modern firearm will not go ‘bang’ unless the trigger is pulled. Knowing and abiding by The 4 Rules of Gun Safety would bring negligent discharges down to zero.

I frequent the Post Office because of a PO Box that I hold. A new law was recently passed that allows people to carry while in the Post Office parking lot, but still not inside. So, everyday, I drive over to the Post Office and park in their lot. I shut my car off, remove my firearm from it’s holster, and lock it in my vehicle. I walk inside for the 45 seconds that it takes me to get my mail, then go back to my car. I unlock my firearm and, while sitting, try to put my firearm back in the holster without anyone seeing me. Does that sound ridiculous to you? What could possibly be the harm with keeping that firearm on me while I make my daily trip to the Post Office? If a criminal wanted to go into the Post Office and shoot people, they would. Do you know why? Because they’re criminals. A ‘No Guns Allowed’ sign will not stop them, but it does stop me for the simple fact that I am a law-abiding citizen. So the question is, who are these laws really punishing?

Take a few minutes to watch this video

So what’s your point?

Let’s get back on topic here; stopping an active shooter in a ‘Gun Free Zone’.

The fact is this; shooters don’t want a fight. It’s why they choose these ‘Gun Free Zones’. They want as little resistance as possible in order to take out as many people as they can, and they know that the resistance won’t come until the police arrive. By that time however, we know the damage that can be done. Again, put someone who is carrying concealed into the mix. How can they continue to kill innocent people when someone is firing back? Their focus would immediately turn to the person firing back and away from the masses. It levels the playing field. It gives people an honest chance at survival.

Fight fire with fire? You bet your ass. At the end of the day, all of these victims deserved a fighting chance against a lunatic. They were denied this right, and they lost the fight.

Share your comments below using the Facebook Comments feature. Do ‘Gun Free Zones’ affect your day to day life while carrying? What do you think your course of action would be if you were involved in an active shooting situation? How could these laws be amended or, dare we say voided from existence? What needs to be done to change the minds of lawmakers? This is the discussion at hand.