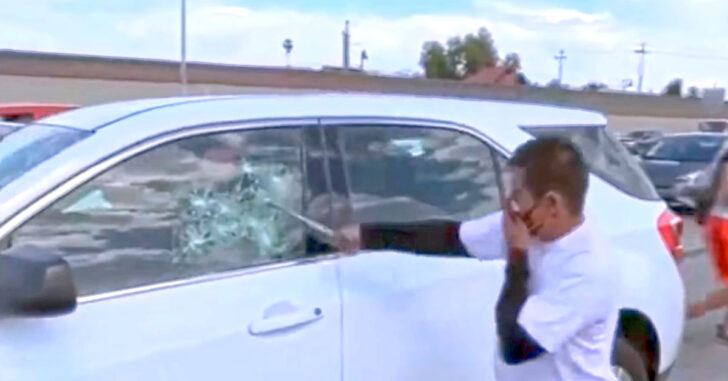 Vehicles forced to stop, protesters standing in the way in an effort to block traffic, and then they start to attack.

These were the scenes out of San Jose yesterday, as protesters turned into violent rioters and began attacking innocent motorists as they attempted to simply drive down the highway.

With traffic stopped and no where to go, these motorists were stranded and stuck in the middle of an unwanted and dangerous scenario.

Multiple vehicles were attacked while people were inside, and I can imagine that those people were terrified for their safety.

Here is one video that has gone viral, showing multiple encounters with numerous rioters:

The top comments on the video seem to echo the same thoughts, basically wondering why these rioters are attacking people in their vehicles who are innocent and just trying to drive.

The same people who posted the above video, later shared a video that’s supposedly the same rioters, being shot at by police with what are assumed to be non-lethal rounds.

Could it be that the rioters know the average citizen in San Jose is unarmed? In fact, the numbers are so low, their chances of encountering an armed concealed carrier are near nil.

Since 2013, Santa Clara County has issued or renewed a total of 150 concealed carry permits. The County population is just shy of 2 million residents. The numbers aren’t low because people don’t want the permits, rather they’re low because the Sheriff doesn’t issue them unless you’re ‘special’.

The people behind these attacks should absolutely be prosecuted, but what about self-defense? Would someone, who was inside of a vehicle being attacked, have a right to use lethal force such as a firearm?

I spoke with Attorney Phil Nelsen, founder of Legal Heat and a leading expert in firearm law, and asked him his thoughts on the legalities surrounding such an event when it comes to lawful self-defense.

Riots are particularly difficult self-defense cases from a legal standpoint because the chaotic nature of a mob makes it difficult to assess who is an aggressor and who is a mere bystander. To be justified in using (or presenting) deadly force in California, all three of the following factors must be met:

Factor 1: You must reasonably believe that you (or someone else) are in imminent danger of suffering bodily injury; and

Factor 2: You must reasonably believe that your use of immediate force was necessary to defend against that danger;

AND Factor 3: You must use no more force than is reasonably necessary to defend against that danger.

Taking those three factors into consideration, this video demonstrates a borderline (if not justified) use of deadly force scenario. It is certainly reasonable to assume someone smashing your car windows in with a hammer satisfies Factor 1 (i.e. an imminent danger of suffering bodily injury).

Factors 2 & 3 are where it gets more case specific. As California does not have a specific “stand your ground” statute outside of a habitation, particular consideration needs to be given to what other less than deadly force options are available. Obviously driving away is an option, unless it isn’t (i.e. a blocked in car can’t go anywhere). Locking the car doors and giving verbal warnings is another option but that doesn’t help much when a group is smashing your windows.

Deadly force is a last resort, but one that certainly becomes available if you are out of other options and sincerely feel the intent of the aggressor is to cause you serious bodily injury or death.

Of course, laws vary from state to state, and you should be aware and up-to-date with what defines a lawful use of lethal self-defense for your particular arrangements.

Another commuter was targeted for his ‘Blue Lives Matter’ license plate, and things got a little ironic.

One driver explains why his Blue Lives Matter license plate led to protesters smashing his car window as they blocked traffic on Highway 101 and denounced the police killing of George Floyd on Friday, May 29, 2020.

With active threats such as these, people need and want a way to defend themselves, should they be faced with a rioter breaking their car windows and threatening them.

If this same thing happened to you in your city, how would you have reacted? Chime in below in the comments.

Previous article: BREAKING: Pentagon Puts Military Police On Alert Due To Crisis In Minneapolis Next article: Interactive US Map Of Active Protests And Riots