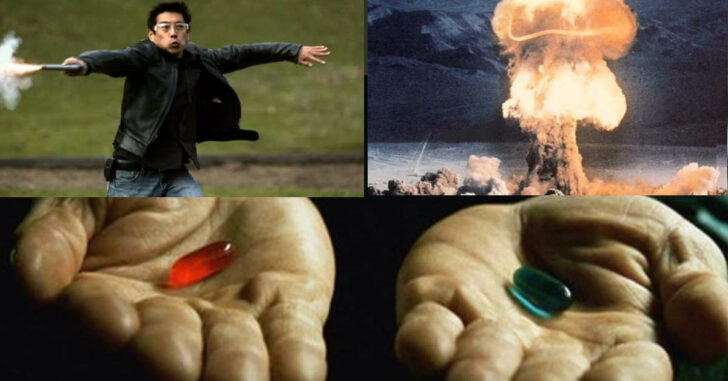 First time gun owners walk out of that gun store with that type of excitement you typically see a little kid opening a gift under the Christmas tree.

For your typical gun owner, he can’t wait to get the pistol home, rack it back, and take it to the range.

And, in a few cases, the gun owner all too soon realizes his newest purchase isn’t what he thought it would be. At the range, he fires round after round at the target. It doesn’t fit in his hand as well as it did at the store. It jumps too much. He can’t seem to get a clean shot with it. An 8-round magazine isn’t enough rounds.

Whatever the reason, the gun owner all too soon realizes he needs to trade it in to get a gun that satisfies his needs. And the gun store clerk looks at him solemnly across the counter.

And then the gun owner is stuck trading in a pistol for less than he paid for it or pawn it off in a private sale. His friends laugh at him. His wife runs off with the gardener to Argentina. The children all grow up to be inmates in the penitentiary.

If only there was a way to avoid this whole hassle! What if I told you there was? There was a really simple way to avoid all the hassle of getting stuck with a gun you don’t want or can’t use…

The answer is to rent the pistol before you buy it.

And here’s ten reasons why you may find that gun you held so confidently in the gun store ended up being a total flunky when it came time to shoot it at the range.

Your pinkie and ring fingers hang below the magazine well. They have nothing to do, nowhere to go. You get to wondering if those two fingers ought to just be cut off. You realize that makes no sense and you’re momentarily ashamed at yourself… And your choice of handgun…

It’s tough if you can’t get a good, heavy handed grip on your gun.

Conversely, your hand doesn’t fit around the grip as well as you thought. When you shoot the pistol, it takes both of your hands to regain control. And, yet still, there’s an uncomfortable grip. A grip that’s either too smooth or too jagged — not at all in the Goldilocks Zone of expectations.

For whatever reason, the grip doesn’t suit you and it’s not something you can easily fix.

#2. Hard To Pull The Trigger

In the gun store, the gun seemed to have the perfect trigger pull — or the gun clerk didn’t let you pull the trigger because he thought you looked funny. In either case, at the range, you discovered that the trigger just feels horrible.

When the bullet leaves the chamber, it’s almost a relief until you realize you’ll have to pull the trigger again. You wait forever for it to reset only to remember: crap, it’s a DAO. Well, we have that covered later in this list. But don’t let that trigger get you down… Unless the return policy at your local gun shop is ZERO. You saw Steven Seagal do it and he obviously looked cool. Now it’s your turn. The only problem is that the slide feels like it’s being held back by a rusted steel locomotive. Your friends look at you nervously as you struggle to rack back the slide. You wonder if the upper receiver is welded shut only to have the range safety officer snap it out of your hands and rack and lock the slide back like he owned it. And now you wonder if that means he owns you.

But maybe that gun isn’t for you.

You read the Concealed Nation article on the Glock 43. And you’ve secretly had a crush on Brandon for years so you figure that obviously the Glock 43 would be a perfect pistol for you. Some people don’t trust their life to just 6 rounds in a magazine.

Well, it was a heck of a time to figure all this out after you handed over that eager gun clerk your American Express with your Concealed Nation logo on it. Surely, Brandon would be so proud of you!

While Brandon loves the Glock 43, he doesn’t want you to get a Glock 43 unless you actually want a Glock 43. You see, Brandon is a good guy and he sure likes his Glock 43 but that doesn’t mean everyone needs or wants one.

…Until your credit card bill shows up in the mail.

#5. Pistol Sights Don’t Line Up Well With Your Eye

Here’s your big chance. New gun in hand, range is hot. Your friends watch in amazement as your brand new gun slides smoothly into action and on target.

Seven yards isn’t too far away, you tell yourself as you let a full magazine fly.

The gun smoke clears and you stare in amazement. You didn’t hit a single damn round in the black.

Your girlfriend quickly texts her girlfriends and snickers. Your friends all wander two lanes over and pretend they don’t know you.

“The damn pistol sights,” you say. You’re trying to reassure everyone around you but really, you’re just trying to reassure yourself. You look a second time and you’ll be darned… The sights really are complete crap. The front dot is bright red — but you’re color blind so it just shows up as gray. The rear sights just seem to wobble and never stay put.

It’s okay. It’s the pistol sights. But you learned an important lesson: if you need to defend your life from a threat farther than 3 feet away, you probably want to use a different gun…

Your best buddy, who used to be an Marine, swears by the .40 S&W. He says it’s the best round that’s ever existed for a pistol — par none. You spent a weekend camping one time and saw a bear from a distance, so you think that maybe a .40 S&W concealed carry pistol would be a great idea. But there’s a catch. Your hands are shaking after that first shot. A follow up shot is out of the question. The range officer, seeing your hands shaking, asks you if everything is alright.

“WAY TOO MUCH KICK,” you sputter.

He nods his head, pretending to understand the jumble of words falling out of your mouth.

You forgot that your Marine buddy benchpresses Volkswagens and routinely entertains visiting guests by swinging out of a tree in his frontyard while yodeling like Tarzan. Recoil for him isn’t the same as it is for you.

We can’t all be Marines.

It’s time to switch down to a caliber you can handle in the form factor you’re looking for. There are concealed carriers in all sorts of calibers. Just because it exists doesn’t mean it’s right for you.

#7. Manual Safety Isn’t All You Wanted It To Be

The gun clerk looked deep into your eyes and said, “it comes with a manual safety.”

He lifts. You can tell.

That was it. Love at first sight. You could put it in your purse, backpack, or the center console and not worry about it “going off on its own”. Forget that guns don’t ever do that. You said a manual safety was for you.

And at the range, you can’t seem to remember whether it’s on or off. You wonder to yourself if you’ll remember to do that if the real thing ever happens.

The real thing. You know, that moment that may never occur. But if it does…

You shiver at the thought…

You pull the trigger again on the firing line. The trigger pushes back.

“It comes with a manual safety,” you repeat the words of the clerk with scorn as you flip the safety off…

What’s better than being single? Why not double?

“Those Single-action/Double-action pistol owners are a bit AC/DC if you ask me,” you tell your buddies around the water cooler. “That’s why I decided to spice up my life with a  Double Action Only.”

Your buddies around the water cooler all laugh in unison. You’ve convinced them.

Now if you could just convince yourself.

At the range, your brand new pistol has so much give in the trigger that you almost forgot you started pressing on it. And then, just like that, BAM! It goes off. Damn that took a long time.

So it turns out that the Double Action Only isn’t as awesome as you thought it would be. Maybe you’ll try striker fire next time around…

#9. Doesn’t Fire Your Favorite Round Your best buddy also tells you that if you shoot a unicorn with one, a nuclear detonation occurs.

Now, it’s the only round for you. And when you load it into your brand new gun, a glint of lamenated paper catches your eye.

Oh, it’s the owner’s manual. Who needs to read that?

Suddenly, you hear an audible gurgle emitted from your stomach. That triple cheese quesadilla from Taco King decided it wants to create a mushroom inside your intestines. You put the gun down, realize you’re going to be awhile, and take the owner’s manual with you. Against your better judgement, you flip open the pages while you hear mariachis play outside the bathroom.

Your pistol, the manufacturer alleges, should not fire overpressurized rounds.

What would the manufacturer know? You guffaw.

Until you realize what would happen if you tried to fire a Critical Defense Critical Duty 147 gr. 9mm round… A mushroom cloud. You don’t want that type of detonation occurring the chamber of your new pistol.

You leave the bathroom empty, heartbroken, and dehydrated. Your favorite pistol, you mournfully conclude, will never accept your favorite rounds.

It was a deal that couldn’t be beat. You saw a brand new Astra A-100 in the used gun section. Shiny, metallic, and known to be a completely awesome gun, you pick it up for $300. You know it was the right decision… Until you start shopping for high retention holsters.

That’s when you realize that no matter how cool your Astra A-100 is, no one will ever make a holster for it because it’s an obsolete pistol no longer in production.

Your favorite carry gun has to either be stuck in a no-retention Uncle Mike’s “Drop It Like It’s Hot™” Sloppy Carry 2.0. You don’t like dropping guns. You especially don’t want to drop your prized Astra A-100.

With a heavy heart, you realize it will never be the pistol of your dreams because there’s no holster that it will fit.

So, in conclusion, there’s a wide number of reasons you should go to a gun store that offers an indoor range. It’s better to test a gun for a little bit of money than sink a whole lot into a gun that can never be your main go-to pistol.

If you figure out a certain pistol isn’t for you, you want to figure it out on the range — not when you need it.

And, ideally, that range test will be done before you drop the big bucks on it.