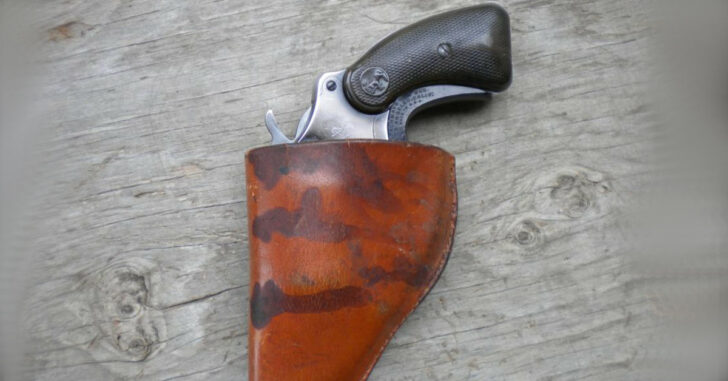 If you make the daily habit of carrying a concealed handgun, it’s very likely your gun and holster gets soaked in sweat. On the daily, it’s really not much of a serious consideration. However, we should take a look at what sweat can do to a concealed carry handgun — both superficially and otherwise.

Sweat is comprised of mostly water with some trace amounts of urea, ammonia, and salts. If you look inside the brim of an old hat you wear all the time, it’ll have a crust of these things. After the water evaporates out, you’re left with that on the fabric alongside some bacteria, dirt, and other things.

The same basic residue can build up on your gun. If you carry with the same holster and same gun, day after day, week after week, you may notice a build-up crust of dried salts. Salt is corrosive to metal parts. Mixed with water, you end up with salty water that can eat away and oxidize the metal springs and pieces within a gun.

This isn’t going to happen the first time you sweat heavily. In fact, you could go quite awhile before any noticeable degradation takes place. But water, when it evaporates, can get trapped within the gun and within that water vapor could be trace amounts of minerals such as the salts your body kicks out when it sweats.

The easiest fix is just to commit to a weekly cleaning cycle. You don’t have to do some complex operation on your gun. Just unload it, break it down, and take a lightly oiled cloth to any metal surface. The solvents in standard gun lubricating oil will wipe up a lot of the salt residue and help bring it out. Completely dry the gun with a soft cloth, lubricate at manufacturer specified points, reassemble, and you’re good to go.

The overall effects of sweat on a concealed carry gun are not terribly noticeable unless neglected for a long time. Even then, so long as the user doesn’t just leave his or her gun in a sweat soaked heap of dirty laundry for weeks on end in the hot sun, that person should be good.

Most noticeable is the effect on cheap bluing. Bluing is often the coat on the surface of the metal that is supposed to protect the exterior from the effects of oxidation. When metal oxidizes, it forms rust. Steel slides, upper receivers are the most susceptible to having their bluing removed if left in a soaking hot mess of perspiration.

This may come into play if you desire to trade in your pistol at a later time for another one. Retail gun stores will appraise both the appearance and function of a pistol before throwing it in the used section of the display case. The more nasty a pistol looks, the less likely someone else is going to buy it. That affects trade-in dollars.

Again, the easiest way to avoid this mess is just routinely clean your concealed carry pistol. It keeps the gun looking good and operating smoothly.

And if you’re practicing with your firearm (like you should be, anyway), you’re cleaning it on a regular basis. Right?

Previous article: Store Owner Sentenced After Shooting Shoplifter In The Back Next article: Two Banks Were Robbed in My Hometown: Here's Why We All Should Be Mad