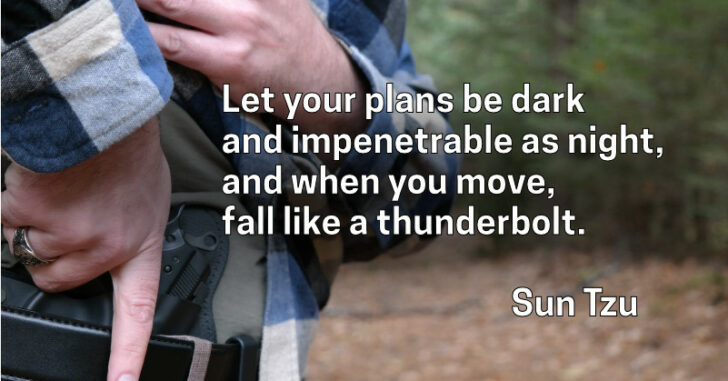 A gun is a great tool for intimidating the weak and powerless, yanno?  If someone angers you or you’re not getting your way, just pull out your gun to let them know you mean business.  Let them know that if any defy you, they face your deadly wrath.

Make sure to let everyone know you’re not going to use it unless someone makes you.  People will clearly see that when they see you draw your gun.  They’ll come to respect you by fearing you.

Those two previous passages illustrate how to die a fool’s death.

The vast (99.999999999999%) majority of legal gun owners do not fall into this category.  They take the responsibility for defending their own life very seriously.  And we’ve reported on countless justifiable defensive gun use incidents that illustrate that.

There are people who you may know that can be described in those first two passages.  Those people are a danger to themselves and others.  As a beginner to concealed carry, your job is to be the opposite of that.

Take your responsibility seriously — as a beginner or someone who has carried for decades.

How do we know this is the path to success?  Because Sun Tzu used a similar formula when advising his military.

(1) Which of the two sovereigns is imbued with the Moral law?

(2) Which of the two generals has most ability?

(3) With whom lie the advantages derived from Heaven and Earth?

(4) On which side is discipline most rigorously enforced?

(5) Which army is stronger?

(6) On which side are officers and men more highly trained?

By means of these [six] considerations I can forecast victory or defeat.

While the above passage may not feel like a ‘dead ringer’ for great concealed carry advice — it’s actually the best advice you can get.  In order to maximize your chances of success in a defensive gun use, the following ought to be in your favor:

And above all else, do not show your hand before the battle has begun.  Showing your gun to your enemy is the easiest way for him to know you can be defeated — because you’ve already proven yourself to be undisciplined and swayed by fear.