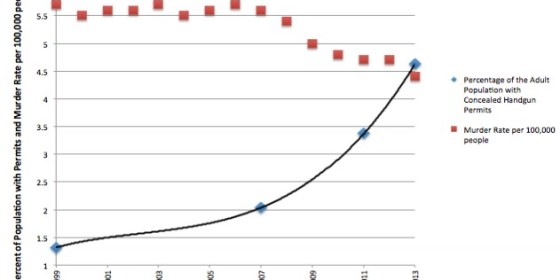 That title is correct, and it’s glorious. According to a newly published report by the Crime Prevention Research Center, all violent crime and murder is down 22% since 2007. An even better number shows us that concealed carry permit holders has grown by 130% in the same time frame.

The report (available here in PDF format) says that 11.1 million Americans have valid concealed carry permits. That accounts for nearly 5% of the US population. The actual number of citizens that carry concealed is probably much larger, as a few states are not up-to-date with their information. Also, there are those states that do not require a permit at all. AND, let’s not forget about open carry.

Furthermore, the report shows us how law-abiding permit holders are.
Spoiler Alert: The numbers don’t surprise us in the slightest.

Consider the two large states at the front of the current debate, Florida and Texas: Both states provide easy web access to detailed records of permit holders. During over two decades, from October 1, 1987 to May 31, 2014, Florida has issued permits to more than 2.64 million people, with the average person holding a permit for more than a decade. Few — 168 (about 0.006%) — have had their permits revoked for any type of firearms related violation, the most common being accidentally carrying a concealed handgun into a gun-free zone such as a school or an airport, not threats or acts of violence. It is an annual rate of 0.0002 percent.

The already low revocation rate has been declining over time. Over the last 77 months from January 2008 through May 2014, just 4 permits have been revoked for firearms-related violations. With an average of about 875,000 active permit holders per year during those years, the annual revocation rate for firearms
related violations is 0.00007 percent – 7 one hundred thousandths of one percentage point.

For all revocations, the annual rate in Florida is 0.012 percent

I love statistics because they cannot be argued when they’re put together properly *cough Everytown cough*. Let’s keep the ball rolling by educating our family and friends on the importance of concealed carry in America. This incline in concealed carry permits means that American’s are waking up quicker than ever to take control of their own safety and the safety of their families.

Previous article: A great thing happened with a gun in Chicago over the holiday weekend Next article: 10 Tips for Concealed Carry Beginners (and friendly reminders for experts)