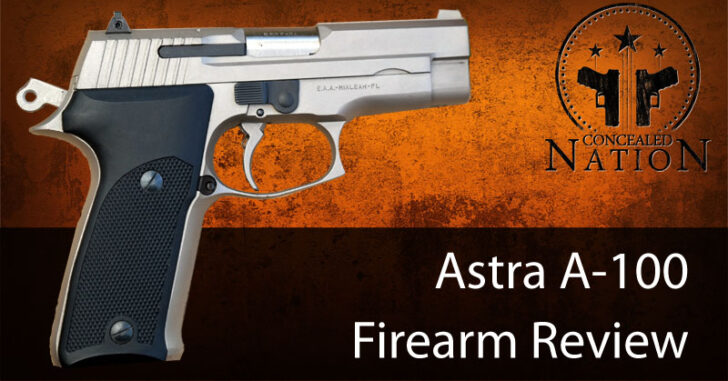 The Astra A-100 was produced for use by the Spanish military.  During its reign as the primary sidearm of Spanish military forces, it got a decent reputation for being a reliable combat pistol.  Chambered in 9mm, the standard magazine capacity is 17 rounds — which makes it a very well balanced pistol for traveling into parts unknown.

However, does it stand the test as a concealed carry pistol?

Sadly, this pistol has all the great attributes of a single-action/double-action combat pistol that performs at the same standards as a Sig Sauer P229.  It does not fit the role of something we would ever recommend placing inside the waistband.

In this video, we review the overall function, disassembly and reassembly of this famous but discontinued firearm.

At present, it’s a rare find in any gun store and most accurately will be found in either the “bargain bin” or through an online broker like Gunbroker.com or similar.

Just because it looks, feels, and acts like a Sig Sauer P229 doesn’t mean the two are interoperable.  The magazines for the Astra A-100 cannot be swapped with Sig Sauer P229 magazines and vice versa.  As far as we know, the parts cannot either.

This becomes especially cumbersome if you ever find yourself in the situation where you need to do repairs.  Because it retails somewhere in vicinity of the $300s, the likely cost to repair this pistol would exceed the cost to just find a replacement.  This is unfortunate because the pistol is extremely simple in design — meaning there are very few parts on it to break.

In addition to the hardships of finding replacement parts, there’s also the issue of getting additional magazines.  Because Astra stopped producing magazines for the A-100 (or at least, not readily found in my searches), I’m pretty much left trying to find them through Gunbroker.com or a related online gun auction site.  The best market value I could find was $35 per 17 round magazine*, however because it’s a discontinued line, prices can spike up to $70 each depending upon demand.

*There are a limited number of 10-round magazines out there on the market — for those who live with state restrictions on magazine capacity.

So living with all that, does it stand up for itself on the firing line?  Yes.

As stated in the video, I’ve fired a Sig Sauer P229 and I’ve fired the Astra A-100.  Ergonomically and performance-wise, there’s no discernible difference.  There are advantages to owning a Sig Sauer P229 versus an Astra A-100.  Namely, Sig Sauer customer service, replacement of parts, and warranty on performance are all big reasons why a gun owner would choose the much more expensive version of this pistol.

If price is a concern but you want to stick with the same valued performance, the Astra A-100 is not a bad choice.

Review Of The Astra A-100… By The Numbers Rated out of 5 possible points – 3 being industry standard.

In conclusion, the Astra A-100 could be considered “Sig Sauer P229 on a budget”.  As long as you’re conscious of its limitations (part replacement, magazines, bulkiness), it could be a very formidable combat pistol for home defense and OWB situations.