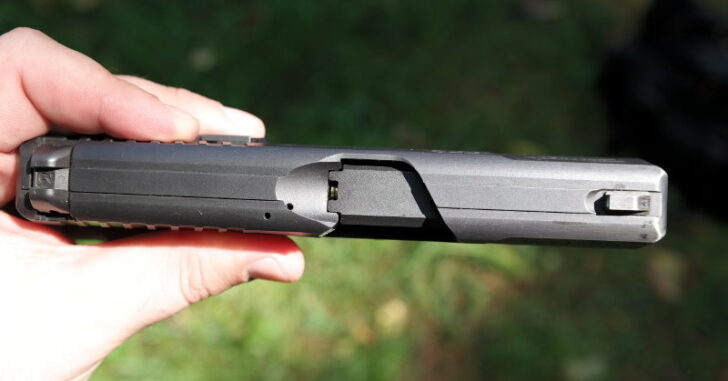 I live in a state that heavily supports the individual’s right to carry a gun. This makes carrying concealed a lot easier because if I accidentally show or print, it’s not a big deal. More importantly, because so many people carry and use firearms, there’s no stigma attached to seeing a gun peeking through on someone’s waistband.

However, there are occasions when I absolutely want to hide the fact I have a gun on me. It’s not because I’m trying to skirt the law or go somewhere I’m not supposed to. There are very good reasons why it’s sometimes alright to sacrifice size for concealment.

Reason 5: Showing And Printing Is Not An Option In Some Places

Several years back, movie theaters were in an uproar after the Aurora shootings. People were naturally apprehensive about walking into a movie theater and becoming a sitting duck.

I had just recently gotten out of college and one of my first concealed carry pistols was an old, used Walther PPK chambered in .32 ACP. It was VERY concealable and it was a great choice for when I was at work and couldn’t afford the hassle of a customer seeing I was carrying a pistol.

The movie theater we wanted to attend was an old run-down dollar theater located in Carolina Beach. Movies that passed from the big, expensive theater went to this one. Popcorn was a bit cheaper, tickets were dirt cheap, and almost nobody ever went.

I was still nervous from not just the Aurora shootings but also some recent violent muggings that had happened down by the beach. I decided to carry concealed. Even though there was no stated “no gun policy” posted, I knew movie theater attendants would be understandably a bit more on edge.

The Walther PPK made sense over the Glock 26 I usually carried when I didn’t really care if anyone knew I had a pistol on me. Quite a bit narrower than my usual compact pistol, it still held 8 rounds and I felt confident if I needed to use it to protect myself.

Living in New England, people talk tough to each other all the time. It’s not at all uncommon to run into someone who’s had a bad day or just watched the Red Sox lose and is less than savory about my Yankees hat.

Funny enough, that exact situation happened this past World Series when the Yankees were about to go up against the Astros. My folks are from western Massachusetts so we grew up watching the Yankees. Where I was in New Hampshire, it was definitely a Red Sox area. The Red Sox were out. Yankees, surprise surprise, were in.

Some loud mouth didn’t like my Yankees ball cap and decided he wanted to make that an issue. Even after I avoided the conversation, walked away, he kept pursuing me to make it an issue. To make matters worse, he was getting egged on by his deadbeat friends.

In my mind, there was risk but I didn’t feel that lethal force would be an appropriate response — despite his comments about the Judge.

It was while I was walking away, I noticed his buddy at the bar was printing heavily through his jersey at about 4 o’clock. Now, not only do I have one jerk I have to avoid, I have two jerks to avoid. My luck.

The thing is: they can’t see I’m carrying a concealed Walther PPS. Why? Because it’s not showing or printing.

My main goal for that evening was to head home and see my girlfriend and have a good night — a better one except the Astros ended up winning. I didn’t want to get held up in endless legal processes, deal with the mental and emotional ramifications of violence, or any of that business. So long as I wasn’t blocked from walking out the door, that’s precisely what I was going to do. And nobody could say or be the wiser that I was armed and ready to protect myself… Just how I like it.

I hope Gillette stadium gets infested by sewer rats and sinks… But that’s a topic for a different time.

Reason 3: Body To Car Transfer Is Much Easier

If you pop into your local post office, you better not be carrying a concealed handgun. It’s a federal offense and they’ll put you through hell if they catch you. I don’t chance it. There’s nothing in my post office box worth it enough for me to spend time talking to a judge.

Thankfully, because I carry a sub-compact, it’s pretty easy for me to pull up and quickly lock it up in my car. I’ve even pulled into full parking lots and been able to discretely stow my pistol without anyone being the wiser.

When I carry a compact handgun, like my SP2022 or Glock 19, I have to deal with pulling out a much bulkier pistol and trying to be sly about locking it up.

My sub-compact holds 8 rounds and meets multiple adjoining states’ restrictions. So, when I cross into Massachusetts with my out-of-state License to Carry, I’m not worried about a police officer snatching up my gun and arresting me.

You may think that sounds ridiculous but that’s exactly what happens if a Massachusetts State Trooper pulls you over and he finds out you have a gun that doesn’t meet their criteria.

There’s also the added “gun phobia” of Massachusetts, in general. People aren’t used to (anymore) seeing civilians walking around with handguns unless they’re either thugs or police.

There’s a thing called the Second Amendment but from the general feedback I hear from average folk I encounter across the border, you’d think it was purely for a well regulated militia and nothing more. Ironically, Massachusetts cities have some truly horrific levels of crime and utterly insane rules of engagement when it comes to defending yourself. Add that to potentially getting the police called on you if someone spots a gun in your waistband — no thank you.

Driving into Massachusetts with a handgun is already nerve-racking enough. I’d prefer to keep my life just a bit simpler by having a gun on me that no one will see and won’t get confiscated.

Reason 1: When Held At Gunpoint, I Don’t Want To Show

If the moment ever comes when I am either staring down the barrel of a bad guy’s gun or feel the muzzle of a gun pressed against my back, I don’t want to let that criminal know I’m armed. A larger pistol will absolutely show.

In the best case scenario, he walks off with my wallet, keys, and phone.

In the so-so case scenario, he leaves with all of the above and my gun.

In the worst case scenario, I end up dead or injured.

For those reasons, I keep my pocket dump pretty mediocre. There’s the keys, the phone, maybe a lighter. If the bad guy is fishing around my waistband, checking pockets, I don’t want him bumping into my gun. That’s why I keep a micro or sub-compact in my appendix. In the rush to pat pockets, he might miss that spot. It’s a chance and it’s not a guarantee — but it’s certainly better than if I had an obvious gun sticking from my waistband.

Previous article: Man, Who Was Attacking Deputy, Is Shot By Armed Citizen Next article: Woman, On Walk With Dog, Scares Off Man With Her Gun As He Tried Attacking Her