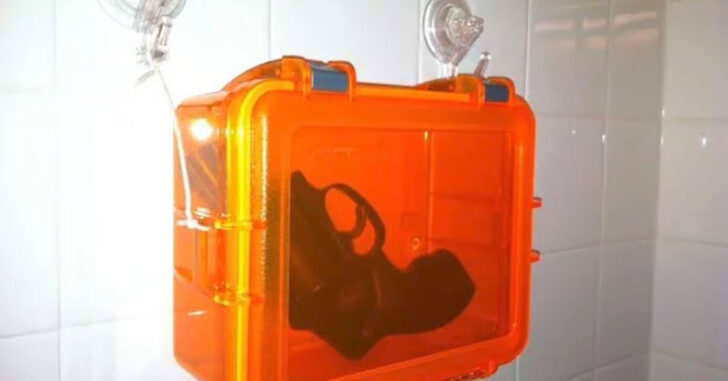 There are many ‘shower gun’ memes out there in the wild, and most people share them as a joke, poking fun at the times we’re in the shower and hear a noise inside the house. Burglar? Cat knock something off the table? You don’t know. You’re in the shower.

Richard Winegardner’s home was burglarized numerous times over the last few months, but it seems that he wasn’t around when things went down. This latest burglary was different, though, as it happened while Winegardner was most vulnerable; in the shower.

While in the shower, he heard someone inside his home. He quickly got out and called 911, while at the same time grabbing his gun that was in his gym bag.

During the 911 call, Winegardner was struggling between confronting the intruder and giving the dispatcher information. Then, he yells “I’m being robbed right now!”

Winegardner said he held the man at gunpoint for as long he could — which caught the stranger off-guard.

“(He) tried to talk me into believing he was a great guy and he wasn’t here to cause me any problems — which I found odd because he already broke into the house,” Winegardner told the News-Sun.

The intruder had run out of the house and tried to get away in a grey SUV. Winegardner fired shots at the SUV, trying to shoot out the tires.

The fleeing suspect didn’t get far, and police later found him at an intersection and arrested him.

The suspect was identified as 38-year-old Jason Moak, and it would seem that Moak is the same person who broke into the home on the other occasions.

Winegardner has multiple cameras set up outside his home, and recognized the same SUV from the other crimes.

While we never recommend shooting at a fleeing suspect, this particular case ended up working out. Had Winegardner shot Moak, well, that could have been a different ending for Winegardner.