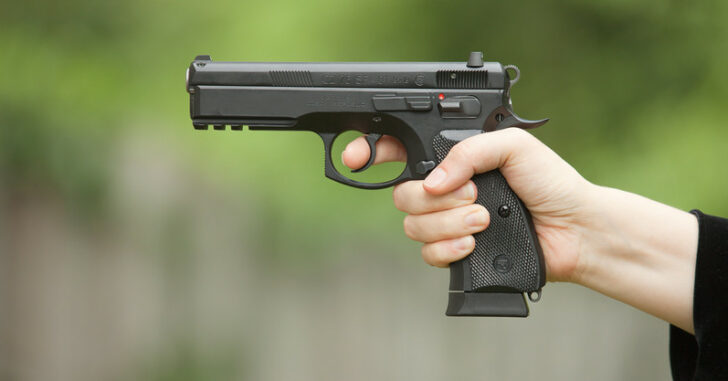 It’s a handgun. Not a “hands gun.” As anyone who’s tried to get a two-handed grip on a small revolver will tell you, a pistol is designed to be used with one hand. Yes, there are any number of handguns that can be shot comfortably and more accurately with two hands. Well, more accurately more easily by more people, certainly. Provided you have two hands available with which to shoot your pistol. And therein lies the tale . . .

Other than concealment, the handgun’s greatest advantage over a long gun is the fact that you can operate it with one hand. During a defensive gun use (DGU), your “spare” hand gives your tremendous flexibility.

While holding your pistol in one hand you can turn on or off a light, open or close a door, dial 911, strike your attacker, deflect a blow, push people out of the way (for a clear shot or to protect them from an attack) and/or grab and move a friendly (e.g., a small child). Holding a pistol with one hand also makes it easier for you to run while shooting (as above), which is almost always a sensible strategy.

Due to the effects of tunnel vision during a DGU, attackers (and you, BTW) tend to focus on the weapon being aimed at them. This accounts for numerous examples of armed defenders being shot in their gun hand or shoulder. In that case, you want to be able to switch hands and shoot from your off or “weak” or “off” hand. One-handed.

By the same token, attackers often ambush defenders and knock them to the ground. Violently. It’s easier to shoot a pistol with one hand from an “unconventional” shooting position (i.e. flat on your ass or from your back). In fact, it may be impossible to shoot otherwise.

All of which means you should practice shooting your pistol with one hand. A lot. BOTH hands, one at a time (obvs.). I sometimes spend an entire range session shooting one-handed, right and left. I’ve discovered two things. First, turning the gun slightly (not full gangsta) improves accuracy. And second, if you can master shooting accurately with your off-hand, you can win a lot of bets at the range.

One bet you may lose in a DGU: that you will be able to shoot an attacker holding your handgun with both hands. A two-handed grip is preferable, but not inevitable. Be prepared.