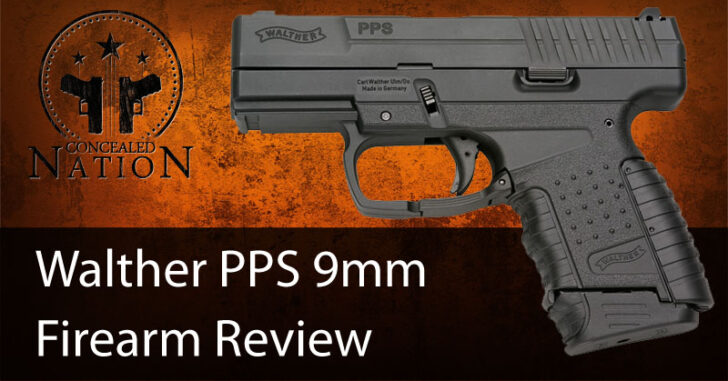 The Walther PPS, chambered in 9mm, has been out on the market since 2007.  The PPS in Walther PPS stands for “Police Pistol Slim” — an odd way of saying they designed it for concealed carry for law enforcement.  We’ve previously reviewed the Walther PPS earlier this year but we felt an additional review would do it a bit more justice.  Different concealed carriers will have differing opinions.

For decades, Walther has always made a name for itself as a producer of high quality, compact firearms ideal for concealed carry.  This single-stack 9mm was so successful that it arguably got both Smith & Wesson and Glock to get their act in order and produce their own line a few years later.  The Smith & Wesson M&P Shield (9mm, .40 S&W) was released in 2012 and, as we all know, the Glock 43 was released in 2015.

For about eight years, Walther had the upper hand in terms of making a pistol that had the precise dimensions a lot of concealed carriers were looking for.  Specifically, the Walther PPS is only an inch wide, has a 3.2″ barrel, and 4.4″ long.  That’s extremely compact.

Magazine capacity begins at 6 rounds and can be extended to as much as 8 through an extended magazine available exclusively through Walther. One of the biggest complaints I’ve had about compact, slim-line concealed carry pistols is their inability to properly compensate for recoil.  And who can blame their engineers?  With such a small amount of volume to work with, engineering priority obviously goes for safety, trigger and chamber alignment, and ensuring rounds properly feed and eject.  What’s left over is mostly consigned to aesthetics.

With the Walther PPS, I felt like it properly distributed the recoil of a standard 9mm FMJ.  Walther has a warning that using overpressurized ammunition (+P or +P+) may degrade the operation of this pistol.  So, it’s not designed to handle it.  That said, I fired a few JHP+Ps through it at the range and experienced no degree of dissatisfaction with its performance.

It’s not at all necessary to run hundreds of rounds of +P (or JHP+P for that matter) rounds through it during practice and this pistol is not something I would expect to hold toe-to-toe in an actual gunfight.

It’s purpose is clear: it’s a highly concealable emergency defense pistol intended to get the concealed carrier out of a jam.  With a 6 round (or even 8 round) capacity, it is not going to hold up in a firefight without a few magazine changes.  That’s not its intended purpose and that’s not how it should be used. While we never trust any indicator other than our own eyes on the actual chamber, I did find it refreshing that there was a slot in the chamber to be able to see if a round was loaded.  When loaded, the back baseplate of the bullet was visible.  When unloaded (as pictured above), it shows nothing.  The striker pin on the rear is also raised when a round is actively loaded.  I didn’t find this particularly useful or helpful but it was worth mentioning that at least Walther made every attempt to make it easy to know if it was loaded or unloaded.

While a lot of companies have put time and research dollars into making interchangeable magazine release buttons on the pistol grips, Walther just went ahead and made an ambidextrous magazine release latch beneath the trigger.  This means whether I’m shooting right or left-handed, I can quickly and easily detach magazine.

While I’m unsure the usefulness of having a 7-round magazine vice the standard 6 or the extended 8, at least Walther gave us that option.  The extended magazines do give some much needed ammunition capacity without getting in the way of performance.

Rated out of 5 possible points – 3 being industry standard.

When competition was scant in the single-stack concealed carry pistol category, Walther definitely came out in the lead.  Now that the market is virtually flooded with different options, Walther tends to get lost in the static.  It doesn’t mean it’s a bad firearm for the price — it just means that the things which used to make Walther stand out, no longer make it stand out.  All said, the Walther PPS 9mm is a very reliable, good choice for inside the waistband concealed carry.