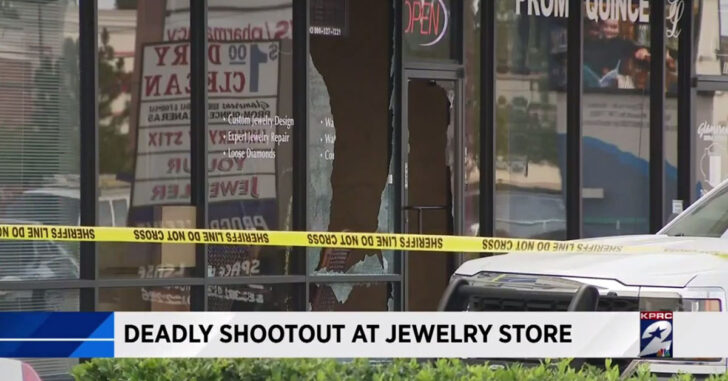 HARRIS COUNTY, TX — We’ve seen this before. For some reason, the bad guys can’t get it out of their heads that jewelry stores, pawn shops, and gun shops are just ideal places to rob. After all — they have so many goodies!

That’s true, but they very likely have at least one armed person ready to prevent the robbery thugs are dying to pull off.

That’s exactly what happened to Cortez Harris, Michael Mitchel, and Jeremy Gomez who decided to rob a jewelry store — and only two would survive the day.

According to KPRC, the three thugs parked next to a jewelry store at an adjacent car wash and entered the store. They were armed with pistols, and they wanted money and jewelry.

Lt. Thomas Gilliland with the Harris County Sheriff’s Office said that the robbers “began to beat (the owner), pistol-whip him. At one point during the struggle, he managed to retrieve a pistol that was inside the store. He exchanged gunfire with the robbers.”

Spoiler alert — he was a way, way better gunfighter than any of the three robbers were.

All three robbers fled for their lives.

One of the robbers showed up at a hospital with multiple gunshot wounds, one was found dead at a local residence, and one was eventually captured by the Lone Star Fugitive Task Force.

That’s some pretty fancy shooting by the shop owner.

Gilliand defended the shop owner’s decision to use deadly force.

“The shop owner has a right to defend himself and his property. It’s fortunate that he wasn’t hurt badly. He had a laceration on his head due to the pistol-whipping,” he said.

Oh, and it is probably worth noting that the shop owner is 66. That’s pretty impressive stuff.

Previous article: #DIGTHERIG - Zach and his Glock 43 in a L.A.G Holster Next article: Guess Which State Is Most Fearful Of The National Concealed Carry Reciprocity Act