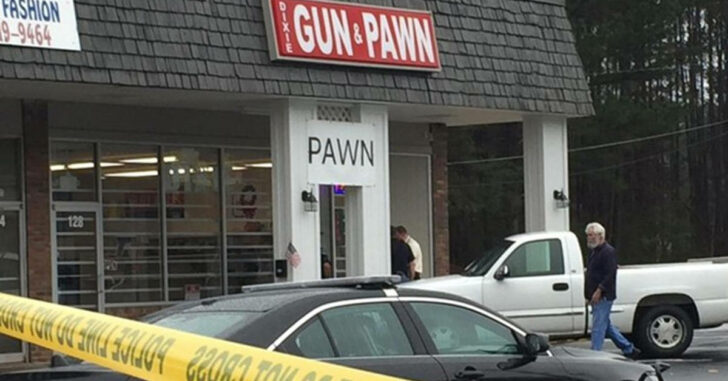 MABLETON, GEORGIA — When bad guys look to rob a place, they are probably best served hitting anywhere where the person defending himself doesn’t have a good chance of stopping them. If you could make a list of places where you’re likely to encounter no or little resistance to an attempt at armed robbery, a gun shop owner in a rural section of Ohio shouldn’t have even made the list. Anywhere.

Well, according to WHIO News, two armed robbers must’ve forgot that. As the owner went to open his shop, two armed robbers rushed into the store. No sooner than they breached the doorway, he already had his gun drawn and opened fire. The first robber was struck multiple times and pronounced dead at the scene. The second one was at least smart enough to call himself lucky to still be breathing and beat feet.

Police are on the lookout for the second suspect but the first one didn’t even get much time to think about all the ways he messed up in this life.

Robbing a gun store is a fool’s errand. We’ve seen burglaries work for bad guys. Heck, we’ve even seen some rather complex Mission Impossible-styled antics towards getting into gun stores… But walking into a place where you can 100% bet the other guy is armed and has every legal right to use deadly force? That’s just a special breed of dumb.

You’d probably stand about as good of a chance robbing a police station in broad daylight. Heck, the police will even give you a free bunk to sleep on and a few free meals before the judge sees you. A gun owner, on the other hand, has every duty to protect himself and walk out of a bad situation alive.

For the owner of a gun shop, he knows that guns are more than just toys or sports — they’re vital to defense. We’re sure local customers will be more than happy to step foot into his shop to seek his advice about their next everyday carry handgun. He’s got working experience in that field now.

As for the rest of us, there’s no excuse to not carry every single day. Concealed or open, whatever the law permits where you live, that gun can be your ticket to life while preventing some bad guy from taking it away from you.

Masked, armed, and not enough brains between the two of them… That’s what we’re up against. Sadly, we have to play to the lowest common denominator.

Carry your handgun everywhere like your life depends upon it. It just may.