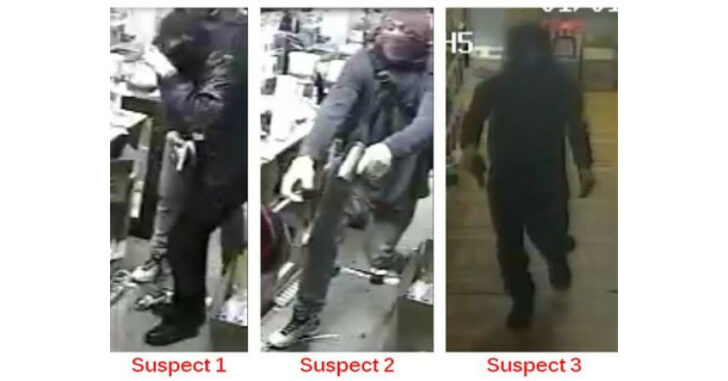 TUCKER, GEORGIA — Alone in the store on New Year’s Day, a clerk had to face off against three armed, masked robbers who quickly overwhelmed him and pistol whipped him to the ground. As he tried to reach for his own handgun, one of the thugs shot him point blank up to four times — including twice in the head. Miraculously, the clerk still managed to walk to an awaiting stretcher after he called 911.

According to surveillance footage of the event obtained by Lawrenceville Patch, all three robbers were armed and wore masks, hoods, and gloves. Even after being shot in the hand, shoulder, and twice in the head, the clerk was able to contact emergency services. Police quickly arrived on the scene.

It is unknown whether or not the robbers actually managed to steal anything as they fled the scene after one of them shot the clerk in the head. They obviously weren’t expecting the outcome.

This is a horribly tragic event that I feel the need to highlight in the midst of so many of our stories where a good guy with a gun prevails in a defensive gun use situation. This clerk didn’t have that opportunity, unfortunately. I’m not going to sit here and nitpick something about situational awareness because, in reality, sometimes the bad guys just hit that fast and with that little warning.

There’s only so much the average gun owner can train for. As a clerk in a convenience store, you’re already at a disadvantage depending upon how the counter is placed and how fast the robbers approach.

That doesn’t mean we stop training precisely how we intend to fight. If anything, it just highlights the very real possibility that when placed into those circumstances, there’s no good outcome possible.

We shouldn’t get into a self-defeatist attitude and just assume the best answer always lays in surrendering. These guys obviously had no problem with beating a man and shooting him multiple times because he hesitated to comply. There’s nothing to say they wouldn’t have done almost the exact same thing if he had complied.

In this world, the guarantee of safety is an illusion. Each gun owner and concealed carrier has to make the willing choice when he is put into that situation whether or not he will fight and perhaps prevail or not fight at all and accept the consequences of whatever comes down the pike.

I pray for a swift recovery for this clerk and hope the owner puts some serious consideration into the security for his employees.

Previous article: Years Of Training Pay Off Big For Homeowner -- Not So Much For Home Intruder Next article: Mother And Son Security Team Fatally Shoot Two Thugs After They Come At Them With Guns Drawn