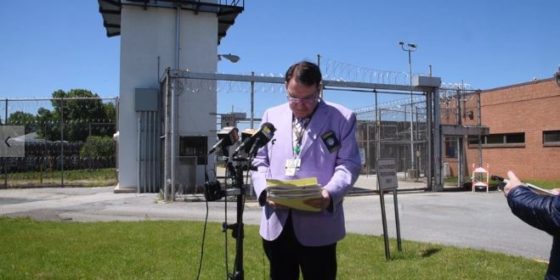 BALTIMORE, MARYLAND — Struggling to cope with an estimated 118 deaths and 200 wounded for the year, the Baltimore City Council is considering less conventional means to deter armed criminals. A recently released, convicted murderer came up with an idea: make criminals exchange guns for bail.

According to the Baltimore Sun, Trevor Brooks is positive his plan will work.

Given the choice between giving up a gun or sitting in Central Booking, “they’re going to turn the guns in as fast as they can,” Brooks said.

In the past, Baltimore has run “gun drives” that allow people to turn in guns for gift cards or cash. Results of these gun drives are rather spotty. Most of the firearms, Baltimore Police concede, are not the types of firearms typically used in the commission of crimes.

The short answer: they end up with a lot of junk guns and out a bunch of cash.

The effect: No decrease in the murder rate.

While a logical man may sit back and easily conclude, “well, that won’t work,” we also have to realize that city politicians are anxious for anything that looks good on paper. It would just be another added bonus, assumedly, if it resulted in any appreciable decrease of the murder rate.

As we’ve discussed in countless articles — guns don’t kill people. People kill people. A failure to address the fact that Baltimore and the state of Maryland have some of the most restrictive gun laws in the country seems to fly in the face of how many people are killed with them.

Addressing the root of this will do more to actually alleviate the conditions in Baltimore than offering an incentive for people who otherwise likely shouldn’t be in possession of firearms in the first place from turning in a likely illegally obtained firearm in exchange for their freedom back on the streets.

It would be the equivalent of telling a heroin dealer he can get out of jail if he ponies up some more heroin for his bail. Great! He made bail. Does anyone think he’ll suddenly give up selling heroin now that he’s back on the street?

This recent proposal sounds like the desperate hoopla of politicians who simply refuse to address the root causes of crime in Baltimore. Because it’s obviously not law-abiding concealed carriers going around getting into these skirmishes, we can conclude that these overly restrictive gun laws aren’t helping.

Perhaps if the common person had a clear path to legally obtaining and carrying a firearm in the city, there may be a chance that at least more people have the means to fight back against violent crime.

But, I guess that idea got passed over at the Silicon Valley Entrepreneurship speeches heard over the weekend that Trevor Brooks came up with his brilliant idea.

Previous article: 300 Guns Stolen From Unlocked Cars In One Year... In A Single County Next article: Why We Carry At Home: Intruder Shot During Break-in, Gets Free Ride To Hospital And Jail