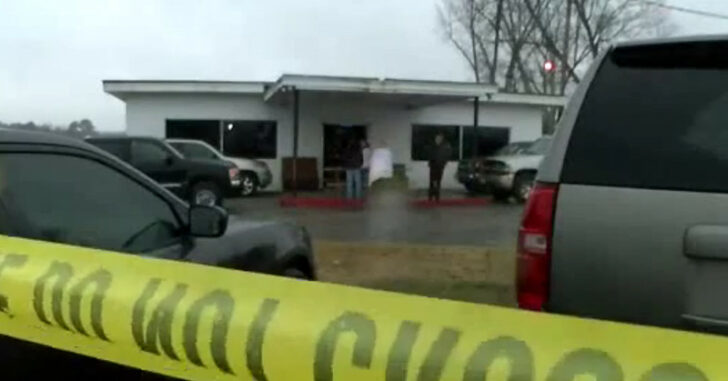 LENOIR COUNTY, NORTH CAROLINA — A concealed carrier was shot and killed behind the bar he owned and operated without even getting to draw his gun.  During an armed robbery of the Pitstop Bar & Billiards in Lenoir County, the widow of the deceased man says the second she heard the shot — she knew he had been hit.

“The suspects came in the building and ordered everybody down. They had their weapons. They went behind the bar. I heard a shot and I immediately knew it was him,” she said to ABC News Channel 12.  “I heard them go out the back. As soon as I knew they were out the building, I ran straight to him.”

According to the woman, the robbers managed to score a measly $400 for their efforts.  Lenoir County deputies believe they have identified the getaway vehicle used in the crime and also have the three suspects connected to it.  This is a straight tragedy.  We LOVE to report on all the times when concealed carriers, especially in their place of work, are able to get the upper hand on the bad guys.  This, unfortunately, is not one of those times.

As concealed carriers, it’s important to realize that not every armed crook looking to knock off a convenience store or bar is dumb.  It’s great when they are.  But dumb and desperate are a very volatile mixture.  In the foothills of the Appalachian mountains, folks tend to be humble and decent — but with the understanding that many are armed and mean to protect what they own and operate.  A crook growing up in this area would clearly understand that and expect no less.

And, being country folk, there’s a good chance that some of those criminals have some amount of background in the use of firearms.  It’s foolhardy and downright dangerous to assume you’re better trained, prepared, and equipped to handle a fight — especially against two armed opponents who have the drop on you.

For this bar owner, there’s a good chance he never even had a chance to lay his hand on the pistol grip before they reacted.  Now that all three are in custody, let us commence with that shady business of plea deals and bargaining before they face their day in court.  For the widow of the deceased owner of that business, she seems to be set for the time being on getting rid of it.

Let us always remember that training and the proper equipment can lend us an advantage but that advantage is never guaranteed nor something to get cocky about.  We may never know exactly what was in the mind of this man’s shooter, but we can hope to be better prepared for our own self-defense should the need arise.