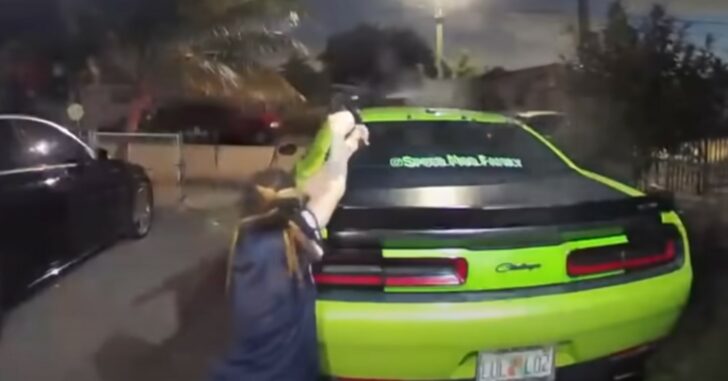 I’m going to take some heat from some people on this, but here’s the deal: This woman endangered many lives.

A group of men showed up at the house of a woman who was selling puppies that apparently fetch $4,000 a piece. Did you see what I did there?

Anyway, things turn dark when one of the men pulls out a handgun and threatens the woman, grabbing her by the neck and pointing the gun at her. At some point, she gets free and the men take off with 2 of the puppies, firing at her as they run away.

The woman then retrieves her rifle and blindly fires in the direction of the fleeing suspects. Watch the video below, and tell me with a straight face that you didn’t cringe.

While I’m all for defending yourself, this is not what proper self-defense looks like. Not only are you much safer inside your home when the bad guys are running in the opposite direction, but the absolute last thing you want to do is fire blindly into the night and hope that you hit something you’re wanting to hit.

I see at least one home in the distance, which could have easily received a bullet or two or 10 from this woman, and absolutely nothing about how this went down was responsible.

There. I said it.

If you’re going to defend yourself, make sure at, at the very least;

None of these points were made, with the exception of the first, but again, going inside the home and locking the door is always a better option than to move closer to a person who is shooting at you while fleeing.

I get emotions, and I get the fact that people don’t want to be ripped off by bad guys, but there’s always a line that cannot be crossed.

Previous article: Brian Laundrie Update: Coroner Called To Park, Personal Items Found At Search Location Next article: Watch This Real-Life Encounter Between An Armed Citizen Holding A Suspect At Gunpoint, And An Officer