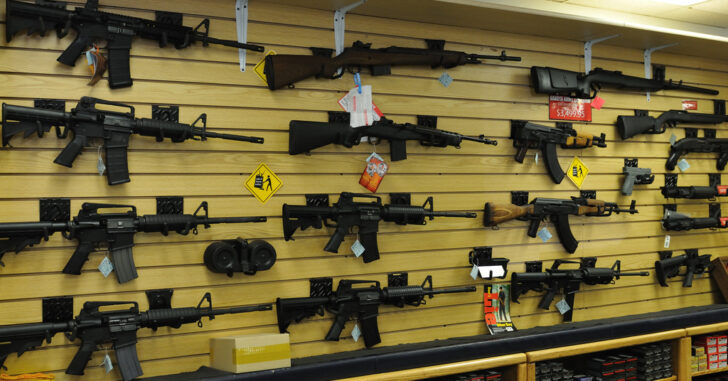 Don’t act like a criminal, don’t get treated like a criminal. That’s the first rule to remember when you walk into a gun shop. A wide variety of people walk through the doors of just about any gun shop. Some people are pensive, nervous about a potential first gun purchase. Others are worried that their wives or husbands will find out they’re using the Christmas credit card on a new pistol.

Those boys and gals working behind the glass typically carry a pistol on their side because it’s not the nervous nellies or the proud cowboys strutting in through the door they’re worried about.

They’re worried about that shifty character, shooting sideways glances, whispering in his girlfriend’s ear about his next preferred purchase.

They’re worried about the guy on his cellphone, taking gun orders and texting photos of what’s in the case to god-knows-who.

And they’re definitely worried about some young buck thinking he can knock off a gun store with a broken down pistol and some liquid courage.

If you’re not in the gun shop to purchase a gun for a felon, aren’t yourself a fugitive from justice, or looking to rob the place — it’s pretty easy to not act like it.

This article is for those who are nervous about walking in the door of a gun shop for the first time. There’s nothing to fear. Gun store clerks don’t typically bite unless it’s lunch time.

There’s three basic rules to shopping for a gun in a gun store:

Those three basic rules are surprisingly difficult to follow for some people.

In case you don’t know the 4 Safety Rules, here they are:

1.) Treat every gun as if it is loaded — until you physically confirm it is not.

2.) Don’t point your gun at anything you do not intend to shoot.

3.) Keep your finger off the trigger until you intend to fire.

4.) Know what is in front of and behind your target.

You’re going to see row upon row of amazing firearms for sale. That’s the point. There’s going to be stickers where gun prices are listed. In the vast majority of cases, that’s the price the store clerk wants for the gun.

Feel free to ask their advice and don’t be afraid to let them know your budget. They’re not there to determine if you’re a bad person or not. They’re there to sell a gun to a law-abiding American who has a right to possess firearms.

What You Say Can Hurt You

The clerk is obliged to follow the rules the Bureau of Alcohol, Tobacco, and Firearms (BATF) sets forth for Federal Firearm Licensees. This means that if you say you’re purchasing this gun on someone else’s behalf, they’re going to tell you to come back with that person.

The reason is this: they can’t legally sell you a gun that’s going to someone other than you.

Depending upon your state’s laws, you’re completely allowed to purchase a pistol and then transfer it to someone else in “private sale”. Some states — like Massachusetts — will want to have some legal paperwork for that transaction to legally occur.

Don’t walk into a gun store wearing drug paraphenalia. A tie-die Bob Marley shirt doesn’t count. But if you walk in smelling like you just got done doing bong rips in the car, the clerk is going to be obliged to not sell you a gun.

Because the clerk isn’t allowed to sell a gun to anyone that is under the influence or addicted to drugs.

Even if you live in a state where recreational marijuana is completely legal, the BATF is a federal agency and their friends over in the DEA say marijuana is a Schedule I drug.

Furthermore, the clerk needs to be able to hand a form (DOJ Form 4473) to you and be reasonably confident you can truthfully answer the following questions.

For your convenience, we’ll list them out. They’re all YES/NO

There’s a few more questions but the major ones are right up front.

If you say anything to the gun clerk by which he may rightfully infer you fall into any of these aforementioned categories — he can’t, in good conscience, sell you the gun.

Bartering and Haggling For Guns with Gun Store Clerks

So you see the pistol of your dreams sitting in the case. The problem is, it’s more than you are willing to spend. Haggling with the gun store owner from this perspective won’t get you anything. If you pony up all cash, he may give you a very small discount — typically no more than $25-50 depending upon how convincing you are.

There are gun stores that sell used and new guns. If you’re in a store that sells used guns, your best bet to dropping the price of a gun you’re interested is to offer something in trade in addition to cash.

If you want to keep that interest, here’s what they’re looking for:

If you’re willing to trade in a few working guns, you may just be able to knock down the price to something extremely reasonable. Just magazines or just optics probably won’t get you there unless there’s very high demand for either.

They’re typically not going to give you a whole big discount if you throw in used holsters. And most gun store clerks I’ve spoken with cannot accept ammunition as trade.

You can sell ammunition, though, in private sales. Keep that in mind. Check with your state’s regulations on that.

Know the market value of your gun prior to using it as a trade-in.

Gun store clerks will, at times, tell you to get what you can in a private sale and come back when you have the cash.

So, we’ve covered the wide gamut of basic etiquette tips. There’s always more. If you’ve ever been a gun store clerk, make sure to tell us about your pet peeves when dealing with customers. We’re always curious to hear some of the crazy stories that come up.

Previous article: Owner Fires On Armed Robber, And That Robber Was Lucky Next article: Why You Should Train To Shoot With Both Arms