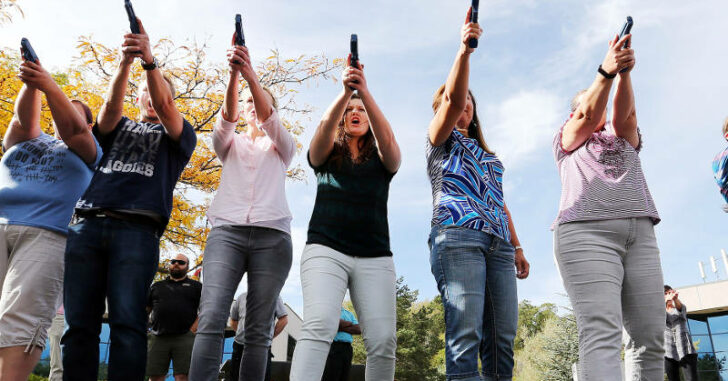 HARRISBURG, PENNSYLVANIA — Imagine, if you will, the very worst scenario takes place right inside an elementary school. Two armed gunmen enter the property of a rural Pennsylvania elementary school and open fire. Teachers scramble to lock down their classrooms and attempt to preserve the lives of their students and themselves. They lock the doors or attempt to evacuate their students from the property until police can arrive. As one teacher rounds the corner, she comes face-to-face with one of the armed gunmen.

In present day Pennsylvania law, the most she would have to throw at this violent criminal is whatever she can pick up with her hand. If Sen. Don White’s (R-Indiana County) new bill gets passed and becomes law, she may be legally allowed to defend herself with her own concealed carry handgun.

“Teachers have come to me and said I want the opportunity to defend my children and to defend my life and give me something more powerful than an eraser to throw at these people,” White told the Senate Education Committee on Wednesday.

This bill, Senate Bill 383, would allow school districts to make the call on whether or not teachers and administrators could carry concealed in the classroom.

Because Pennsylvania is so close to the headquarters of so many superfluous anti-gun lobbyists, there was a flood of people saying this bill would place children and teachers into harm’s way.

Those same people fail to even consider the option that those kids and teachers are already in harm’s way by proxy of the world we’re living in at present. A failure to plan for the worst is simply setting them up for failure in the future.

“School personnel shouldn’t be told that the only help they will get from Harrisburg to make schools safer is the option to carry a loaded gun around their students,” said Wolf spokesman J.J. Abbott.

“Harrisburg can help schools be safer by giving them adequate funding so schools can hire trained security professionals like school resource or police officers should school professionals feel they need it, and counselors and support staff for students.”

These advocates for increasing funding for security would rather taxpayers be bilked for every last dime rather than give adults the choice of how they want to defend themselves and those students they watch over.

The answer to every problem isn’t throwing more money at it. The answer is having people that can be ready and prepared, at a moment’s notice, to defend themselves and their students until police arrive.

Police arrive very quickly to schools. But they still only arrive in minutes. When seconds matter, minutes can kill.

We’re not asking teachers to turn into Rambo or fight at a police officer’s or soldier’s level of fighting. We’re simply considering that some may wish to keep a gun on them for their own defense. And if they never need it — all the better.

Previous article: Lawn Care Worker Shoots Dog During Attack Next article: If Armed Robbers Stole Your Gun AND You Watched Them Trying To Enter, Your Gun Was Probably In A Bad Location