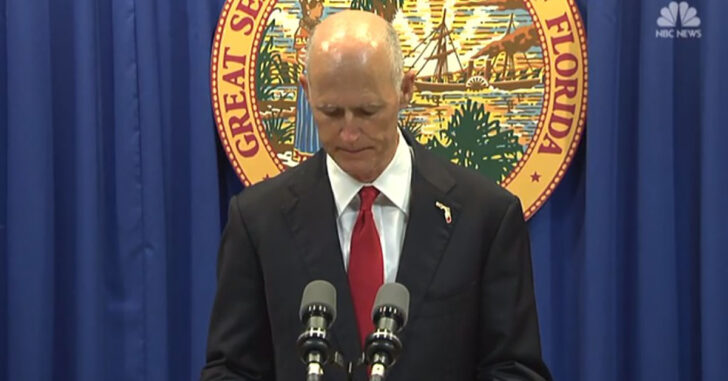 FL Governor Rick Scott, a Republican and supporter of the 2nd Amendment, called for new gun regulations after a school in his home state came under attack last week by a mentally ill, former student. The new proposals are broken down into three sections, and look to make some big changes to the way that firearms are sold, as well as how mentally ill people are identified and approached. “I disagree with arming teachers,” Scott said. “My focus is on bringing in law enforcement. I think you need to have individuals who are trained, well trained.” While Scott disagrees with arming teachers, he “instead called for ‘hardening’ school security through multiple measures, including metal detectors, steel doors and posting at schools at least one law-enforcement officer for every 1,000 students by the start of the 2018 school year.” The first proposal aims to increase the age requirement for purchasing any firearm from 18 to 21 years old. While most states have a 21-year-old requirement for handguns, long guns can be purchased at a lower age. The gunman in the latest school shooting in Florida is 19 years old, and purchased the firearm legally, although he should have been banned from purchasing. The second proposal looks to make sure that mentally ill people, who are deemed unfit to own a firearm, are unable to purchase or own them. “I want to make it virtually impossible for anyone who has mental issues to use a gun,” Scott said. “I want to make it virtually impossible for anyone who is a danger to themselves or others to use a gun. The third proposal is designed to ban the sale or purchase of ‘bump stocks’, the same type which was used in the Vegas shooting back in October. NPR.org outlines exactly what Scott looks to accomplish with his proposals, as many more sub-proposals are included in the above: With calls to ban certain firearms, Scott declined to add these requests to his proposals, saying that the banning of firearms would not make a difference and would only hurt the law-abiding citizens.
Categories: General, Politics

Previous article: How Many Rounds Should You Keep With You While Carrying? Next article: Ex-Husband Is Shot And Killed By Friend Of Ex-Wife After Breaking In And Attacking Her