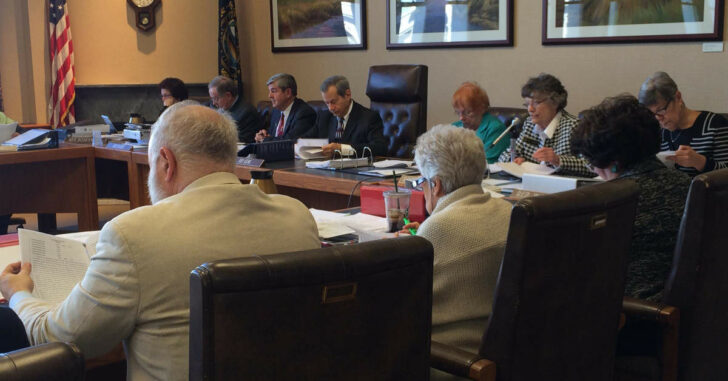 CONCORD, NEW HAMPSHIRE — A local New Hampshire representative accidentally dislodged her concealed carry handgun from its holster while trying to remove her backpack in a hurry.

According to the Concord Monitor, the gun did not discharge and was barely noticed when it hit the ground with a thud. The meeting was about expanding full-day kindergarten. There were kids reportedly in attendance.

via the Concord Monitor

“I apologize,” the Milford Republican said. “I don’t normally carry a backpack. I guess that’s not a good combination. Lesson learned.”

Despite no harm coming to anyone, it was certainly embarrassing for the representative and her colleagues were quick to speak stern words to her behind closed doors.

House Speaker Shawn Jasper issued a statement later, saying he had met with Halstead and “impressed upon her that, while no harm came from this incident, her lack of control is unacceptable.”

New Hampshire lets its representatives and the public carry guns inside the State House and Legislative House.

State Rep. Carolyn Halstead (R-Milford) immediately accepted responsibility for her actions and has said she intends to work with firearms instructors to prevent anything like that happening again. She admitted that she takes personal defense courses involving firearms and obviously didn’t foresee the issue before it happened.

For a bad situation, that’s a really good reaction.

Mistakes with firearms can and will happen. They’re never acceptable. But to say no one will ever mess up is to ignore reality — and a very valuable lesson that should be remembered for the rest of his or her life.

The core factor is accepting responsibility for the mistake and taking actions to ensure such risks are addressed.

In this case, it looks like she was in a rush and swung her backpack off her back and the force of the backpack was enough to dislodge her handgun. I certainly hope she considers a handgun holster with higher retention. But the main factor at fault is mindfulness.

As concealed carriers, we always have to be mindful of our gun. I know this is something I have to constantly keep in the corner of my mind as I go through my day. As a long time concealed carrier, it would be too easy for me to forget there’s a gun in my waistband. However, the second I need to run across the street or hop up to reach a high shelf, I have to know that my gun isn’t going anywhere. That’s why I use a high retention polymer handgun holster. I can tighten it to increase retention and I don’t have to secure the gun with my hand if I do need to jump up or run a short distance.

When we make mistakes with guns, there can be very serious, unintended consequences. When bad things happen, accepting responsibility is important. If something bad happens with a gun and no one is hurt, it’s really time to wake-up to reality. Complacency is the enemy to every person who carries a gun.

I don’t know how many gun owners out there have slipped up or accidentally done something they weren’t supposed to and no one was the wiser because either no one saw it or no one was hurt. But, please, please, please, don’t ignore that mistake. Just because nobody caught you or called you out on it doesn’t mean it didn’t happen. Accept responsibility for the mistake. Learn from the mistake so it never happens again. It’s the only way we can learn after something goes wrong.

Previous article: Homeowner Shoots At Intruder, Tells The News, "We Want Our City Back. We're Sick And Tired Of Being Sick And Tired." Next article: At What Age Do You Put The Gun Down?