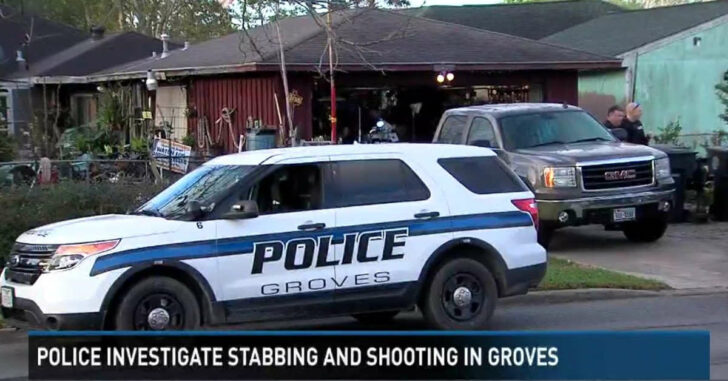 GROVES CITY, TEXAS — An armed homeowner shot a supposed assailant armed with a knife after he said the man with the knife tried to rob him. The sound of shots fired drew police to the residence and the alleged armed robber escaped and hopped over the neighbor’s fence to evade police. It took eight police officers to corral him and take him down while the neighbor looked on in horror.

According to 12 News Now, both the knife-wielding assailant and armed victim were taken to the hospital. The victim suffered a stab wound associated with the attempted robbery and the robber suffered from a gunshot wound yet still was able to run.

No word yet as to whether or not the robber was under the influence of any drugs. Neighbors say the police have been making regular trips to the neighborhood over the past month. This incidence marks occasion for one neighbor to comment he’s getting a security fence to keep escaping robbers from running onto his property.

You know that saying, “there goes the neighborhood?”

All it takes is one house on a block to go bad. Either it’s a place for people to stop by and get their drugs or, even worse, it becomes a flop house for addicts. Once that happens, it’s just a question of ‘how long’ before police start to make regular visits.

This is hard for people who’ve lived in an area peaceably for decades. They watch on as homes get burglarized, cars get broken into, and people get robbed on the street. It doesn’t take long.

If a person is able, he usually throws his house up on the property and moves away. Especially those folks with young kids that were looking to raise those kids up in a good community, losing a home due to a drug house opening up in the area is hard. That’s a lot of lost investment of time, money, and resources.

However, there’s a lot of folks that can’t just move away when an area gets bad. They’re stuck there. Either because that’s their home and they have a right to live in it or they just can’t afford to move somewhere else — it shouldn’t matter which. For those folks, the best solution is to get armed, get a concealed carry permit, and keep that gun on you at all times. A thief can’t steal your guns out of your car or home if the gun is attached to you.

It comes down to safety, security, and peace of mind. That’s why I recommend surveillance cameras to capture any criminals moving around your home, a security fence to keep them from hopping easily in and out of your property, and a good handgun loaded with self-defense ammunition. Those three things alongside a little training and preparation can help make your situation a lot better even when the neighborhood is going downhill fast.

Previous article: Concealed Weapon Detection System Being Implemented For The First Time. Coming To A Neighborhood Near You? Next article: Armed Ex-Boyfriend Kicks Down Door Only Discover Big Brother Has His Own