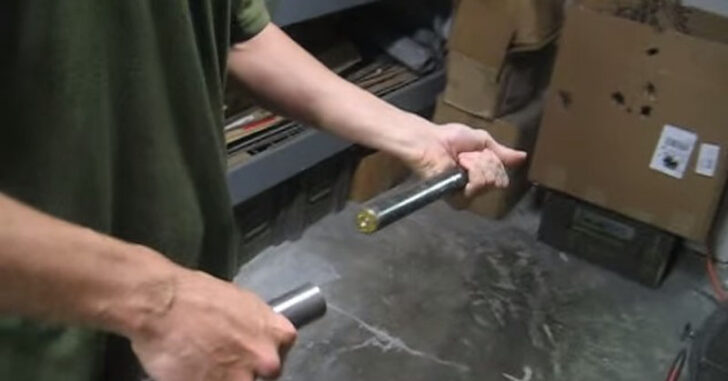 In this video, you’ll see a rather rudimentary device constructed out of two pieces of pipe you can easily find at your local hardware store.  It’s called a zip gun or one-shot shotgun and such inventions have been around since modern munitions have existed.

A zip gun, at its most basic level, need be nothing more than two pieces of overlapping pipe with a screw or sharp point to pierce the primer of a shell or bullet.  There’s no rifling and not much to it.  Some people build stocks so it can be aimed. And others just use a nail and a piece of iron tube.

Worth mentioning – the metal used in these tubes is not meant nor designed to absorb ballistic level forces.  That means they are subject to catastrophic failure if a shell puts too much pressure on it.  Catastrophic failure can, in this case, mean anything from a crack or chip to the tube violently exploding.

The zip gun has been employed by those who don’t have easy access to firearms.  There were versions used in WWII for resistance elements that didn’t have access to guns.

A famous example is the Liberator.  It’s a slightly fancier version of the basic zip gun.  It was constructed out a single sheet of fabricated steel.  The Liberator could only fire one .45 caliber bullet at a time and the handle could be used to store back-ups.

For the French resistance (and other resistance elements), it was a great way to kill a German at close range and take his firearms.  It was not considered a firearm you, yourself, would take into battle. In modern times, it’s often used by young thugs in the barrios of Central and South American gang-controlled territory.  Because it’s easy, cheap, and if the boy should fail to kill his target, in the mindset of the cartel employing him, nothing is lost.  Basically, anywhere where people need to kill other people and don’t have the money or resources to obtain a proper firearm, they resort to “one shot shotguns” or equivalents.  They’re brutal in close quarters but not really within the scope of personal protection – whatsoever. Can it be a reliable firearm?  If properly constructed – absolutely.  But there’s no single advantage of using a zip gun for self-defense purposes where the person can legally purchase and carry a firearm.

Where is a zip gun effective?  Predominantly close quarters (10 feet to close).  Outside that range, the lack of rifling on the barrel and ability to properly aim take a drastic toll on performance.

Zip guns, like the ones you saw in this video, are legal if you register with the ATF as a manufacturer of firearms prior to constructing one.  There’s a form to fill out and a process to follow but, to be honest, that’s not really what we do here at Concealed Nation.  If you’re really interested in making a zip gun for recreational purposes, be advised that there’s plenty that could go wrong, and you should already be aware that it’s a bad idea.  As such, we claim absolutely no responsibility for how you decide to use this information because if you actually try to construct a zip gun, you’re just asking for trouble.

If you can legally purchase a handgun for personal or home protection – do so.  If you want a shotgun, buy one.  Don’t use zip guns.

Previous article: Home Invasion Survivor: "Guns saved my life and I was against guns. I now carry." Next article: 17 Feet Down, 73 Guns Later - Cat Burglar Busted On His Getaway Tricycle