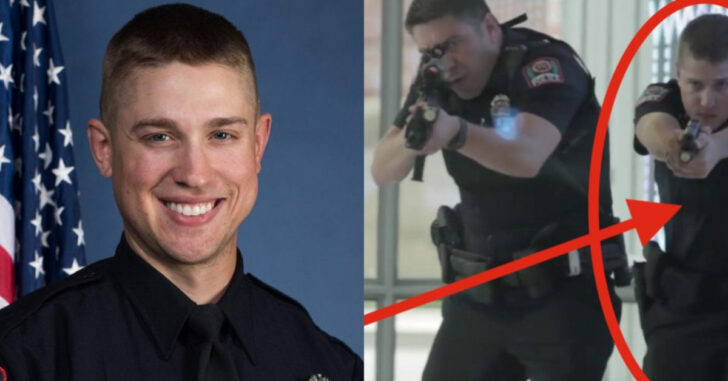 Last week, we reported on an incident involving a lone attacker crashing his car into Ohio State University students and then going on a stabbing rampage. This incident left ten people seriously hurt. It could have gone a lot worse if a good guy with a gun hadn’t been near to neutralize the attacker before he could do even more harm.

OSU Police Officer Alan Horujko is considered responsible for fatally shooting the lone suspect believed responsible for the attack at Ohio State University. The attack occurred just outside the materials science and engineering buildings on the OSU campus. Officer Horujko actually left an engineering program as OSU to pursue law enforcement. Who knew he would end up defending others as they pursued their higher education dreams?

via the Independent Journal Review

“I just couldn’t see myself sitting in a cubicle,” Horujko said of his decision to leave engineering and pursue law enforcement.

“By working (at Student Safety Services) and seeing what the police do, and what Student Safety does on the campus, the kind of behind-the-scenes stuff really led me to a law enforcement career,” he said.

There is a lot to be proud of when it comes to this OSU safety officer. He credits his fast reaction to the event to the extensive training that OSU puts its officers through. He even participated in a video that sought to educate students and faculty about what to do in the event of an active shooting.

He ended up ending an attack minutes into when it began.

In a video made only a year ago, he worked with other law enforcement to build a training video to prepare students and faculty on what they should know and how they should react to an active shooting on a school campus.

Their video on surviving an active shooting situation focused not just on simple techniques that can save your life but also how to respond and interact with law enforcement.

This is pivotal during trying times where officers of the law are forced to determine friend from foe with lightning quick reaction. Educating the common man as well as other law enforcement will be critical in the coming months and years as we can no longer afford to pretend that events like these are not becoming more common.

Everyone here at Concealed Nation sends their warmest regards to Officer Horujko and hopes he enjoys a good moment in the limelight. His hard work and determination, coupled with some pretty good aim, helped ensure that dozens of OSU students are able to continue on in their higher education.

We need more people like Officer Horujko. He is a credit to his department, the Ohio State University system, and his community.