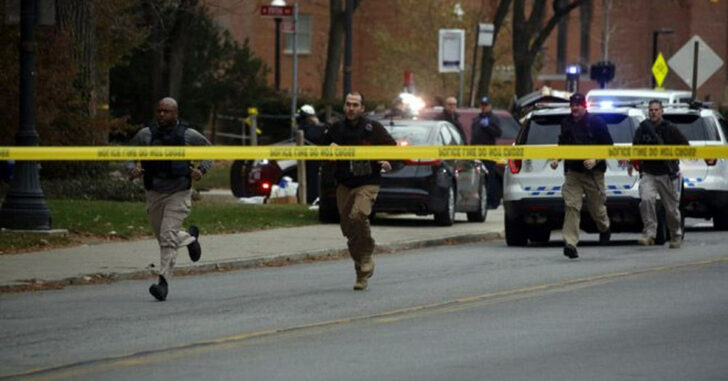 COLUMBUS, OHIO — Nine injured and one dead after a man drove a vehicle into students on the campus of Ohio State University. He then allegedly got out and proceeded to stab several bystanders before being shot to death by a police officer.

The attack began at approximately 9:52 p.m. when a driver drove his vehicle onto the courtyard outside the materials science building on the campus of Ohio State University.

“I didn’t see anything with the shooter, what happened was it was outside of MacQuigg Lab,” Kovacich told The Lantern. “The guy ended up just coming and hopping the curb with his car and trying to mow down a couple people. He lost control, and I think he ended up hitting three people, and then people were around the car. Somebody asked him if he was OK and the guy just hopped out of the car with a butcher knife and starting chasing people around.”

A campus security police officer shot and killed the suspect within minutes of the attack. Authorities believe the attack was pre-planned and the perpetrator is believed to be an 18-year-old Somali man.

An active shooter warning was issued for the campus at OSU by 9:56 a.m. and lifted by 11:14 a.m. After the campus was secured, authorities allowed the students to return home for the remainder of the day. Classes were cancelled. But he was reportedly appreciative of the fast response of law enforcement to the scene.

In the midst of a mass shooting or mass violence situation, a lot of bad information is going to get pushed out through social media. We’ve seen some ridiculous things such as “use books as body armor” and using a backpack as a bullet shield.

The best advice for situations like a mass shooting on campus is to barricade in place and wait for law enforcement.

Rachel LeMaster, who works in the engineering college, told The Associated Press a fire alarm sounded before the attack.

“There were several moments of chaos,” she said. “We barricaded ourselves like we’re supposed to since it was right outside our door and just hunkered down.”

Initial reports claimed there were multiple shooters and plenty of other wrong information. That’s why you should never depend upon unofficial social media channels to get a good assessment.

Ohio is one of the few states that charges permitted concealed carriers with a felony if they walk onto campus. The attacker, in this particular case, used a butcher knife and his vehicle to attempt to kill innocent people. Thankfully, a police officer just happened to be nearby.

Had a police officer not been nearby, it would have been up to students and faculty to flee the scene or fight an armed man without the benefit of a handgun. If a student or faculty member had used a gun, he likely would have faced felony charges for possessing it on campus.

That’s why we need concealed carry on campus.

These situations aren’t going away, folks. It’s up to us to make sure the laws benefit those law-abiding citizens. Otherwise, it’s just bad guys who carry onto “gun free zones”.