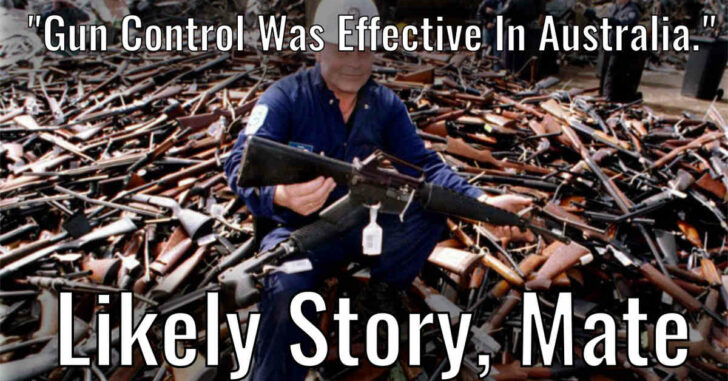 In 1996, a horrible tragedy occurred in Tasmania. A lone criminal killed 35 people in what is now known as the Port Arthur Massacre. Reeling from the sheer magnitude of an event that is altogether uncommon, Australian politicians near unanimously moved to restrict the possession of firearms by law-abiding citizens. Under an amnesty program launched later that year, law-abiding Australians were forced to register their guns and — in many cases — turn them over for confiscation to the state.

Under the National Firearms Programme Implementation Act 1996, citizens were restricted from owning many types of semi-automatic rifles, shotguns, and pistols. The buy-back program sought to purchase these firearms back from citizens at or near cost. The program is credited with buying back somewhere around 650,000 firearms at a cost of $230 million AUS dollars.

However, according to back-to-back annual reports completed in 2013 and 2014 by the Australian Crime Commission, it appears over a half a million firearms remain in the ‘grey’ or illicit marketplace. These were predominantly credited as being used by criminals but, in all honesty, anyone in possession of any unregistered firearm in Australia is considered to be in violation of the law.

The buy-back program in 1997 was voluntary but the registration was not. According to the new set of laws, Australians should have turned in all their arms and complied with the new Council on Foreign Relations (CFR) standards for gun ownership.

It’s increasingly apparent that many may not have — and have no intention of doing so. Included in this population seems to be a number of violent criminals who continue to use guns to carry out illicit activities. Law-abiding citizens, heavily restricted in ownership and not allowed to carry a handgun concealed, are completely vulnerable to these criminal enterprises.

Sydney University gun policy analyst Philip Alpers said that a new buy-back program would only be effective in collecting up “rubbish guns” such as those that have either limited application or are either completely defective.

So, our question to this is: if gun control was so effective in Australia, why are there so many armed criminals there?

Did gun control work in keeping law-abiding citizens any safer or was it just one further step by the state to take control for one’s own life and welfare away from the common man and woman?

We posit these questions as the discussion continues here in the United States about whether “common sense” gun reforms would actually be effective in saving lives.