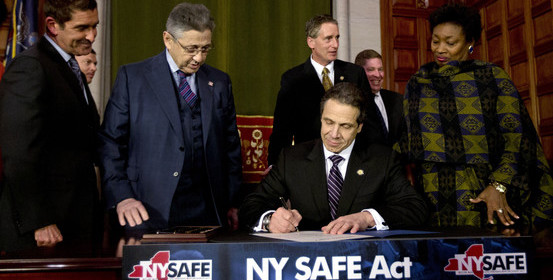 A federal appeals court has upheld the majority of the NY SAFE Act, a law passed in the Empire State enacting the strictest firearms laws in the United States. The ruling also struck down one of the more obviously ridiculous provisions (full ruling here). The decision is being immediately appealed by the New York State Rifle and Pistol Association (one of the plaintiffs) as the case continues its march to the Supreme Court where it may finally settle, once and for all, whether modern firearms like the AR-15 are protected under the Second Amendment as strongly as handguns . . .

In its ruling, the federal court said that New York State’s ban on “assault weapons” such as AR-15 rifles was constitutional and doesn’t infringe on the Second Amendment because, “When used, (assault) weapons tend to result in more numerous wounds, more serious wounds, and more victims. These weapons are disproportionately used in crime, and particularly in criminal mass shootings. They are also disproportionately used to kill law enforcement officers.”

As we’ve already noted, absolutely none of that is true. Judge Jose Carbranes didn’t really seem to care, stating that “gun-control legislation need not strike at all evils at the same time to be constitutional.” In other words, he’s down with the argument that “if we can save just one life by infringing on the rights of Americans, it’s worth it.”

On the same logic, the ban on “high capacity” magazines was also ruled to be constitutional, but the notion that residents will only be permitted to load a maximum of seven rounds in their 10 round magazines was laughed right out of the court. That should give you an idea of how ridiculous that concept is, even though it sailed right through the New York legislature and governor’s office without so much as a second glance.

In this case the court seems to have applied intermediate scrutiny to the law, which requires only that a law furthers an important government interest in order to be acceptably constitutional. In my opinion this law fails that test, since the SAFE Act has had zero impact on safety in New York and even if 100% compliance were somehow reached, the impact would be negligible at best. Opponents of the law claim that strict scrutiny should be applied instead, requiring that the law be tailored to be as minimally burdensome as possible.

There’s little doubt that this case will be heading to the Supreme Court. There’s been a lot of confusion in the lower courts regarding how to apply the principles of the Heller decision and some guidance from the Supremes seems to be in order. Gun owners live in interesting times.

Previous article: Tombstone Re-Enactment Goes Sour -- Fellow Actor Shot By Idiot Who Didn't Check His Gun, Fired Live Rounds Instead Of Blanks Next article: What Concealed Carry Handgun Would You Get Your Daughter In College? We Got This...