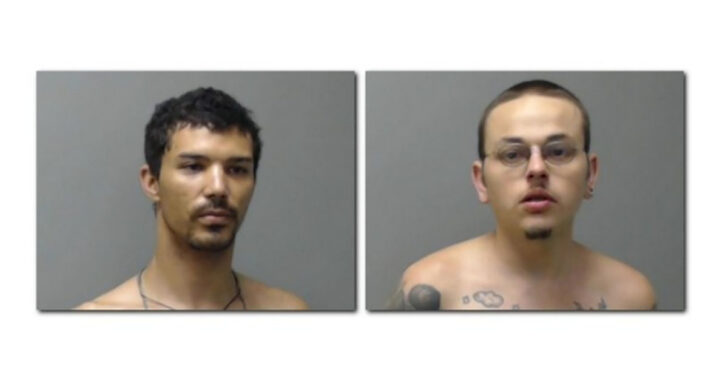 BRIARCLIFF, ARKANSAS — If we’ve learned anything from home invasions and robberies, it’s that the thug life is hard. Acting tough, verses being tough, are two completely separate things.

Take 29-year-old Greg Garreans and 28-year-old Kip Swadley as perfect examples of Thugs4Hugs. They go in tough, but end wanting hugs when faced with armed resistance.

Deputies responded to a call of armed persons threatening the homeowner of the residence on Ben Nevis Drive. When deputies arrived, one suspect was lying on the front yard, and another was lying on the driveway. The two men were identified as Garreans and Swadley.

Garreans stated he discovered his AR-style rifle missing from his residence Thursday morning and believed a former house guest took his rifle to the residence on Ben Nevis Drive. He and Swadley allegedly armed themselves with loaded 12-gauge shotguns and extra ammunition, as they went to the residence to retrieve the rifle. The third suspect accompanied them with a samurai-style sword.

When the trio arrived, Garreans reportedly went to the front door, Swadley stood next to a boat in the driveway, and the third suspect remained in the street. Garreans knocked on the door and asked for the man he believed had stolen his rifle. Instead, the homeowner reportedly came out, armed with a handgun, and Garreans complied with his instruction to drop his weapon. The homeowner then disarmed Swadley and instructed both men to get on the ground. The third suspect allegedly retreated in the vehicle they arrived in and fled the scene.

The homeowner told police that when he opened the door, he had a shotgun immediately pointed at him.

It would seem that this homeowner knew how to talk, and was able to convince the suspects to drop their firearms and comply with his orders. That’s not very #thuglife of them, but it’s great for the homeowner.

The men are lucky that they weren’t immediately shot, as doing so would have been justified by the homeowner. Instead, they were carted off to jail and face the charges.

This might be a good opportunity to talk about home surveillance equipment. Do you have cameras inside and out? If you do, it’s not a bad idea to peek at the camera when the doorbell rings. I’m not trying to make anyone overly paranoid, but it’s a handy tool to see who is outside.

And if you look at the camera and see people with guns, it’s probably best not to open the door. Call 911, set yourself up in a good position, and hold.