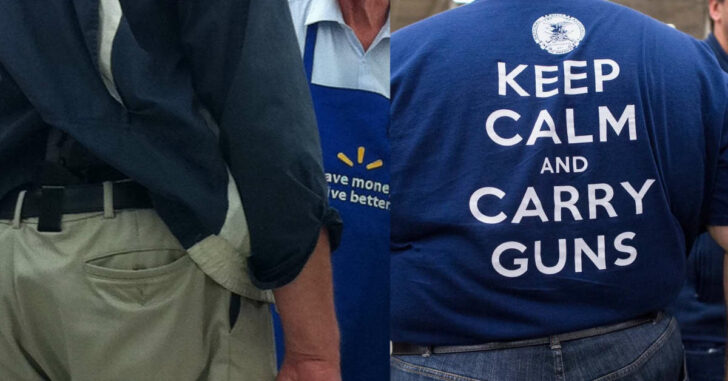 For first time concealed carriers, the paranoia is completely understandable. If you’re carrying a concealed handgun for the first time, you’re probably worried about someone discovering you have a gun and confronting you about it.

You’re probably worried about the gun falling out of your holster and knock around on the ground.

You’re worried that you’ve inadvertently stepped into a “gun free zone” and some police officer is going to arrest you.

You’re worried some bad guy sees you’re carrying a concealed handgun, slips up behind you, and steals it.

See: “5 Times When It’s Okay To Sacrifice Size For Concealment“

Reason #1: You’re Constantly Fidgeting With It

If you put your handgun into a holster that holds it well, don’t mess with it. It didn’t disappear on you.

SIDENOTE: However, if you put your concealed carry pistol into a cheap holster that doesn’t grip onto the gun, you may want to be cautious… One off-duty police officer had to learn the hard way that it doesn’t pay to go with a cheap holster.

The biggest way anyone will notice you’re carrying a concealed handgun is by seeing you draw attention to it. By fidgeting, adjusting, or moving the gun in your holster — even under a layer of clothing — you’re drawing attention for anyone within eye shot.

If you’re legitimately concerned with your pistol/holster situation, take it to a private bathroom or other place away from prying eyes.

Reason #2: You Packed Too Big Of A Gun Many novice concealed carriers will make the mistake of trying to carry a larger compact or full-size pistol on their waistband. This ends up with a noticeable pistol grip imprint on their clothing line. That’s an easy tell. It’s also called “printing” in the concealed carry community.

Experienced concealed carriers — who need to keep it concealed — usually pack a smaller sub-compact or micro-compact that fits seamlessly along their waistband. It’s an honest mistake. You put the gun in and a flap of clothing got caught on it. It’s like getting a line of toilet paper stuck to the bottom of your shoe or leaving your fly unzipped or laces untied. It’s stuff that’s guaranteed to happen to you at some point in your life.

However, for everyone around you, it’ll be clearly evident you’re carrying a concealed handgun. That’s not exactly the type of attention a lot of concealed carriers are looking to bring to themselves.

Reason #4: You Advertise You Carry If you’re cool with everyone know you’re potentially carrying a handgun, wear apparel that advertises it. Make sure to let everyone know around you, “hey bad guys, if you’re armed, I’ll be the first threat you need to neutralize.”

There’s nothing wrong with being proud about the 2nd Amendment or carrying a gun. You should be, gosh darn’it. If the goal is to not be noticed, though, it’s going to do you no good to let everyone know about it by wearing clothing advertising the fact you’re carrying a gun.

Well, those are the four major reasons — if anyone was curious — how other people know you’re carrying a concealed handgun. If you’re okay with other people knowing, there’s arguably no point in trying to conceal it in the first place.

Simple things like wearing a jacket, not wearing pro-CCW shirts, and not checking your gun in public are all some easy ways to keep it a secret that you have a gun you can use to defend your life at a moment’s notice.

Previous article: Ruger Announces New Pistol; The Ruger Security-9, And The Price Is Just Stunning Next article: Know Your Target: Girlfriend Shoots Boyfriend In Chest After Mistaking Him For Intruder