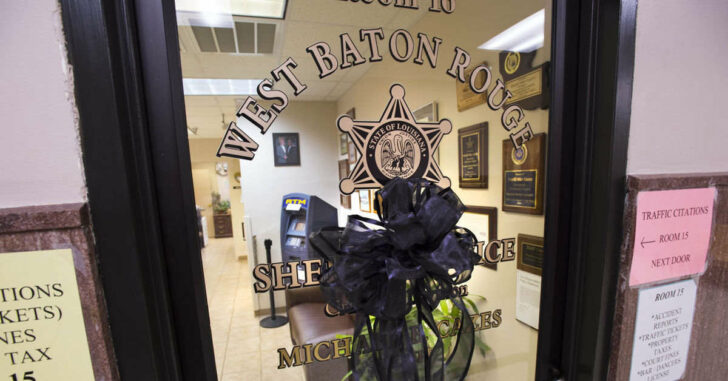 BATON ROUGE, LOUISIANA — A tragedy for a tight-knit community of deputies and family members as the West Baton Rouge Parish Sheriff’s Office mourns the loss of a 22-year veteran of their force. Deputy Donna LeBlanc was killed defending herself and her 20-year-old daughter on her own property after a neighbor opened fire with a semi-automatic rifle and killed both of them. Her 9-year-old was located inside and managed to lock the door and call 911 before the gunman turned the rifle on himself.

According to the West Baton Rouge Parish Sheriff’s Office’s statement to The Advocate, little is unfortunately known of the nature of the incident due to the fact all adult participants are dead.

“There was an exchange of gunfire between them,” Pointe Coupee Parish Sheriff Bud Torres said. “Donna fired three shots at him, I don’t know how many he fired before killing her.”

The nature of the argument was unknown but the 20-year-old daughter was living with the deputy and she allegedly answered a knock on her door from a next door neighbor. When she answered the door, she closed it behind her, securing the 9-year-old inside.

“We don’t know what the argument was about. We don’t have any eyewitnesses,” Torres said Wednesday. “There will be parts of this that are lost because the people that were there are dead.”

What is known is that Deputy Donna LeBlanc returned home to find the 29-year-old neighbor on her front porch. He is believed to have initially retreated to his truck which was parked outside their home. He retrieved a semi-automatic rifle and opened fire, killing Donna LeBlanc. She is believed to have returned fire but unsuccessfully. He then turned the rifle on the daughter and killed her.

It is believed he tried to gain entrance into the home but thankfully the 9-year-old locked the door and called 911.

Neighbors initially didn’t know where the shooting was coming from and had wrongfully assumed it was perhaps that same neighbor discharging rounds in his backyard, which was considered normal for him.

When he didn’t gain entrance to the house, he turned the rifle on himself and killed himself. The 29-year-old was described as a very quiet neighbor who regularly fired his rifle in the backyard prior to the incident. It is unknown what sparked this incident but the tragedy is felt throughout the community.

This is the darker side of home defense. We can’t always anticipate what we’re going to roll up on when we come home to find unwelcome but recognizable company on our property.

The hard truth, it’s hard to score hits with a pistol while you’re taking fire from a semi-automatic rifle at distances of less than 20 yards. Even for a veteran of law enforcement, the situation proved too dire to pull off. This isn’t a testament of her inability to put rounds on target so much as being stuck in literally one of the worst situations imaginable.

The good guys don’t always win but the cost for not trying is arguably just as high, if not worse. Our deepest condolences go out to the community in West Baton Rouge and the family as well.

Previous article: Security Guard For A Mining Operation Fends Off Two Attackers Next article: Woman Shoots Fiancé In Self Defense -- Domestic Abuse Alleged As Cause