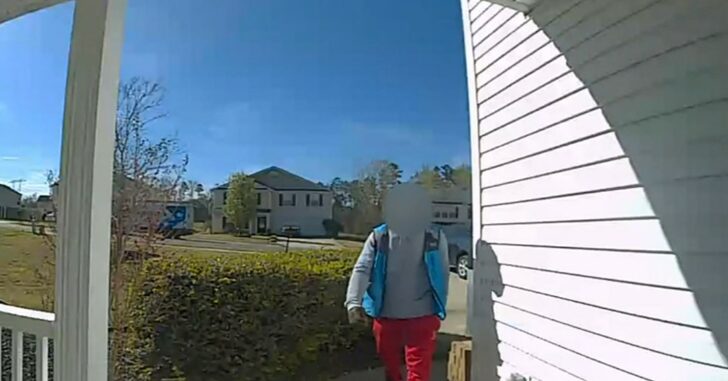 CHARLOTTE, NORTH CAROLINA — A man posing as an Amazon delivery worker entered a woman’s house and locked the door behind him…but she wasn’t in her River Hills Court home alone Monday morning when it happened.

The woman told police that a man wearing an Amazon vest rang her doorbell. When she opened her front door, he asked if a package had been delivered to her by mistake. She told him no, then closed her door. Her doorbell camera video footage shows that instead of leaving, he walked around the corner of the garage and was seen peeping around the corner looking back toward the front door.

A short time later, he came back and questioned her about the package again, and again she told him that she did not have it. This time, he pushed his way into her home and locked the door behind him which caused her to panic, as any normal person would do.

Enter Conway, her loyal canine companion. She told Conway to ‘get him’ and he sprang into action, lunging at the intruder. Apparently not wanting to take his chances with Conway, the man fumbled with the door, managing to get it unlocked and open. The lady of the house pushed him out onto the front porch and locked the door.

The suspect was captured by police following a chase that ended in the nearby town of Huntersville, just after 11 a.m. Monday. He was taken into custody on Huntersville-Concord Road near Glendale Drive, wearing the same clothes as seen on the video, minus the Amazon vest.

Neighbor Melvin McCoy believes the suspect targeted his victim, telling a local reporter, “She walks her dog everyday around the same time, all the way around the block. She comes back and went right in that way. He came right in behind her, basically he targeted her, but he targeted the wrong one though.” McCoy didn’t see or hear anything during the incident, but added, “Why would you be so bold to do it in daylight, especially in this neighborhood?”

According to the victim, police drove her to the Huntersville location to identify the suspect, but they have not provided any further details or discussed possible charges.

While we don’t ever want to imply that a victim bears any responsibility for such a crime, but we do believe in looking for lessons from real world incidents. Were there things that she could have possibly done differently to avoid the events that allowed the man to enter her home?

Given the neighbor’s comments about her predictable daily walks with Conway, perhaps the suspect had been in the neighborhood before and was aware of this, or maybe he just happened to see her on this particular morning and thought she looked like easy prey. Had she saw him during her walk? Was she aware that he was in the neighborhood?

When he came up on the porch, he had no package in his hands, and there was no delivery vehicle parked in front of her house…two red flags with might have led her to think that something wasn’t quite right. Despite that, she opened the door for him not once, but twice.

We believe that being armed and prepared to use lethal force is the right thing to do when anyone enters your home by force, but we also realize that guns aren’t for everyone. We are big fans of keeping doors locked at all hours of the day and night, and not opening them to strangers. We’re even bigger fans of dogs for home security, and thankfully Conway was up to the task.  According to his mom, his bravery was rewarded with a nice juicy steak…as he should have been.

Previous article: Reflections On 18 Months As A Contributor At Concealed Nation Next article: CCX2 S03E06: Recent News for the Concealed Carrier