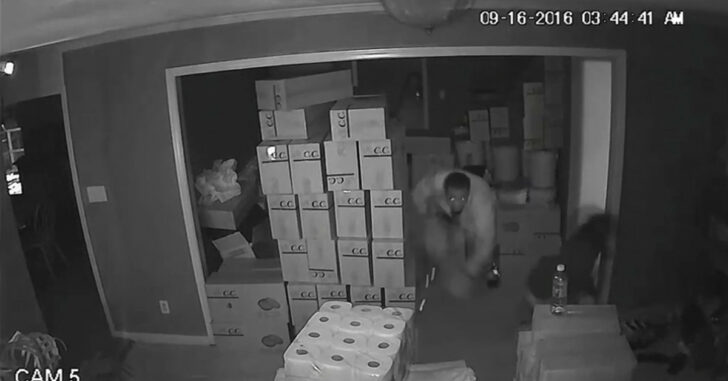 GWINNETT COUNTY, GEORGIA — Home surveillance footage revealed the brave actions of a woman home alone and faced with three armed robbers. Video shows the three armed robbers moving through the house with impunity until all of the sudden the occupant emerged firing her gun. Initially, the intruders attempted to return fire but one was caught in the torso by a bullet. The other two quickly decided to vacate the premises and Gwinnett County authorities are hot on their case.

According to WSB-TV 2, the woman was uninjured in the exchange of fire. She is staying at the residence and is believed to manage a restaurant. Because of the clarity of the footage, Gwinnett County law enforcement highly anticipate they will be able to identify the two surviving intruders.

From the video footage we’ve obtained, we’re able to clearly mark out the face of at least one of the surviving suspects. There are multiple videos included in the footage handed over to Gwinnett County. The great news is this woman acted with ferocious power to give herself the initiative. Faced against three armed opponents with absolutely no problem opening fire on law-abiding occupants, she depended upon sheer fear and intimidation. Shot placement was a bit off but good enough for one unlucky intruder. The remaining two will likely live to reconsider their professions if police don’t get to them first.

These guys are modern day scum. Armed, ready, and depending upon numbers and force to exercise their control of the situation. The only thing stopping them is a law-abiding gun owner and good shot placement. They didn’t stick around to trade rounds for long after they lost one of their own. The woman bravely takes the initiative and keeps it until they’re gone.

Unfortunately, there’s plenty of collateral damage they leave in their wake. Not only did she have to survive incoming rounds, the house itself suffered structural damage in the wake of them wildly shooting in return fire.

Previous article: Even Criminals Are Getting Wise To Home Invasions -- Apartment Dweller Defends Himself Against Two Armed Assailants Next article: [VIDEO] Why Training For Scenarios Is Important -- Reality Versus Perception