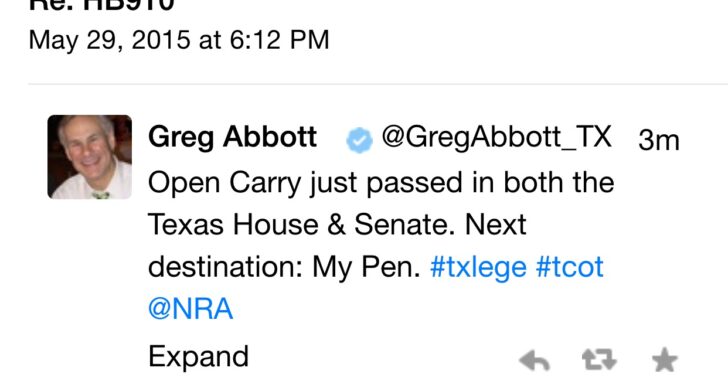 Watching laws being made is never pretty. And the process of passing an open carry bill in the Lone Star State would make any sausage factory appetizing by comparison, but both houses of the legislature just passed HB910. And as you can see from Governor Greg Abbott’s enthusiastic tweet above, the deed is now all but done. Yes, Texans will have to have a concealed carry license in order to tote a heater out in the open. And despite the best efforts of some die-hards, the local constabulary will be able to  ask to see the permit of anyone they spy with a pistol visible on their hip. But letting the perfect be the enemy of the good doesn’t get gun owners anywhere. It’s about playing the long game and after too much to-ing and fro-ing, Texas just took a big step in the right direction.

Previous article: Guns For Beginners: “Paranoia” Is Your Friend Next article: Concealed Carrier With Precision Shooting Takes Out Three Armed Robbers, Saving Himself And Two Others