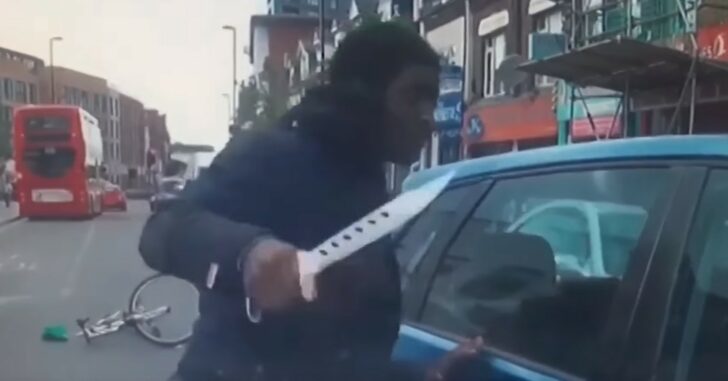 Sometimes, tempers run high on the road. Other times, people are just batsh*t crazy. This is mostly the latter. This incident happened in London, where guns are banned and citizens are helpless to defend themselves. Here’s what happened, as reported by Daily Mail;

A cyclist wielding a huge ‘zombie’ knife tried to smash a motorist’s window during a terrifying rush hour road rage row in front of stunned London commuters. Dashcam footage captures the horrifying moment the young man sprinted after a Volkswagen Polo on a busy high street in Croydon before trying to break through the driver’s side window in a frenzied attack. The chilling attack comes amid a knife crime epidemic in London that has so far claimed 43 lives this year.

The driver was able to run away after the attacker gained entry to the vehicle from the passenger side. Police are apparently still looking for the suspect. London is on a new campaign to try and curb knife violence, and part of that campaign is to round the ends of knives so they aren’t pointy. Ok, it’s not really part of the campaign, but it is a real suggestion from a retired judge in the UK. If the world would just ban crazy people looking to do harm to others, we’d have a solved problem. Who was going to help this driver in this case? Not himself, certainty, because he can’t carry anything to defend himself. Were the police around to help? We didn’t see them in the video. We’ll look again.
Categories: General, News