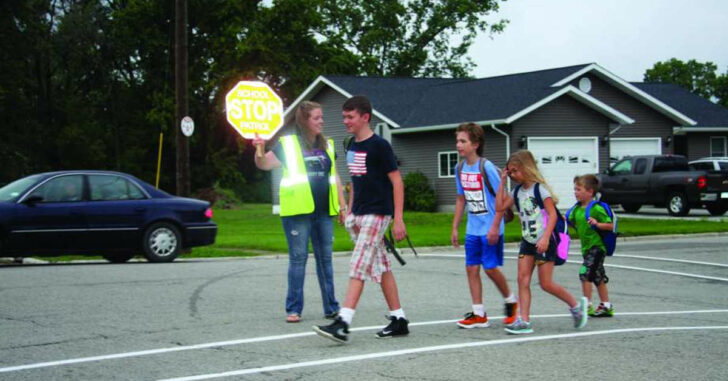 HARBOR BEACH, MICHIGAN — One crossing guard in Harbor Beach, Michigan, takes her job seriously. Tasked with protecting the city’s youth as they cross the street, she carried a handgun concealed on her person. That has all gone up in the air as city officials have stipulated she is not allowed to carry concealed. She is allowed, at present, to carry openly but she says that’s not the message she’s trying to send.

In a great article covering this subject in the Huron Daily Tribune, Casey relents on her decision to not carry openly. Both her and the chief of police agreed that it would draw too much attention.

Since January, she has carried concealed legally with her Michigan-issued Concealed Handgun License (CHL). This would normally afford her the ability to carry concealed anywhere not specifically restricted by state and federal law.

However, the city council had voted unanimously to disallow all city employees from carrying openly or concealed — thereby restricting Casey’s ability to carry her handgun.

“I talked to several council members and it was all (based on) their feelings,” she recalled. “All they could cite was, ‘How they don’t think it’s right for kids to walk past someone who is not a police officer carrying a gun.’”

Faced with no facts to back up their assessment, Casey viewed their arguments as ones mostly based upon feelings related to the possession and carrying of firearms.

“It was all about feelings, what-ifs and how scary guns are,” she added. “I was asking them to not make judgment based on their feelings because that’s not how we govern … and at the very least, I asked them to table the issue so I had more time to prepare information.”

The Mayor has agreed to table the issue and allow time for Casey to accrue information and data that would help city council members make a more educated decision. This may prove to be a difficult task because what Casey is being asked to do is prove a negative.

“I am gathering information and considering putting together a petition,” she said. “I’m hoping to overturn this and if nothing else to at least provide an option to legal CPL holders to be able to conceal carry while on the job.”

In a logical argument, the onus of burden is upon the accuser to back his claim. Their claim is that a city employee carrying a gun is a legal detriment and a danger to others. This claim is completely unfounded.

In terms of public outcry, Casey claims there is none. For the entire time she has guarded children crossing the road, she reports she has received no complaints.

“I have not received any negativity ever,” she said. “… In the city of Harbor Beach, I know every single one of these kids that walk past me. A majority of them are aware that Ms. Casey carries a pistol.”

We’re starting to see more and more impingement on law-abiding citizens and their ability to carry concealed on the job. These restrictions are completely unfair to the individuals who perform the duties of their job without issue.

This is something that will only get fixed when concealed carriers and gun owners bring attention to these issues and demand them to be corrected. We need to correct this. There are dangerous precedents being set by people uninformed that carrying a handgun is not only a constitutionally-granted right, it is also a benefit to all those around.

Here’s to hoping Casey gets the city council to strongly reconsider their stance on this matter. When police are minutes away, a concealed carrier can respond in seconds.