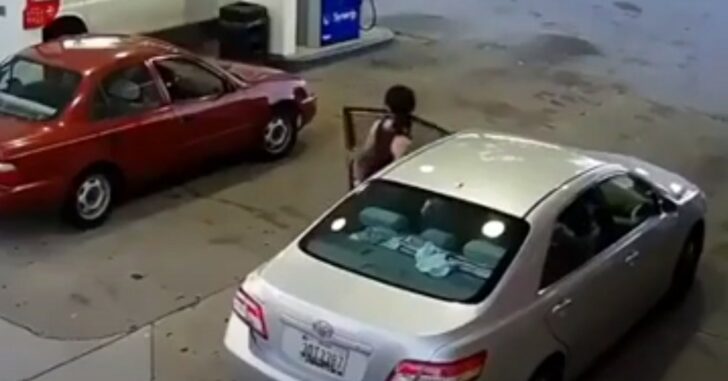 A video is being shared that shows an incident that we have very little information on. What we can determine, at least, is that the video is from a recent incident given that people are seen wearing masks.

A woman is seen getting into her car, when a man comes up and opens her door and starts yelling at her. He seems to grab her cell phone and she starts to drive off, but stops and opens her door but does not exit. The man goes back up to her door, and that’s when she fires several shots.

The red vehicle to the left is hit by at least one bullet, as shown by the glass shooting up from the windshield after impact.

While we don’t know the details behind the story, we can still look at this from a self-defensive position.

The woman seems to look over towards a person or persons yelling, just before getting into her vehicle. If she knew that someone was coming her way in an aggressive manner, there may be time to hit the gas and get out of there.

This isn’t the case, of course, and a scuffle ensues between the two. She breaks away enough to start driving off, but likely realizes that her phone has been taken. With that, she stops and opens her door, likely in an attempt to retrieve her phone. Side note; this paragraph is pure speculation.

IF the above is true, nothing is more important in that moment than getting yourself out of that dangerous situation. Not your phone, not money, not anything. Keep moving forward and get to a location where you’re able to call police.

She did stop, however, and opened her door. This makes for a bad situation all around, and allows the man to get in her personal space again, and dangerously close. She fires a few shots, sending one into a nearby car and at least one into the man who was assaulting her.

Until more information is available, there isn’t much else that can be said about this incident. Both could be arrested for all we know, but we’ll continue to search the webs for information.

Previous article: 4 More High-Profile Names Have Been Added To The List Of Anti-Gun Businesses Next article: Man Shoots And Kills Suspect Who Was Stabbing 25-Year-Old Woman