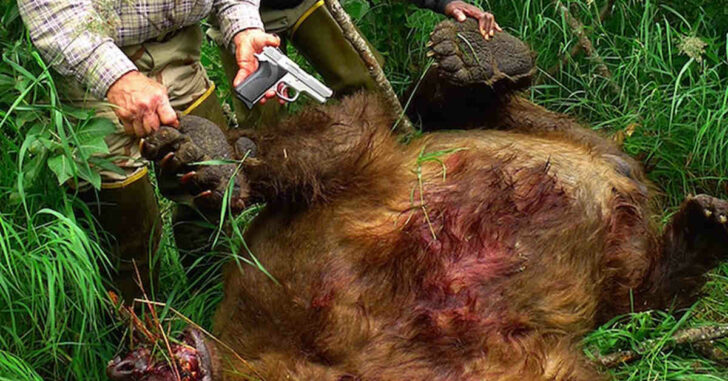 Out in the wilderness of Alaska, men and women make their trade taking clients out into the Bush and back. These brave folks have learned to walk with nature to make their daily bread. Unfortunately, sometimes nature wants to make a meal of them.

In one recent story told to the NRA Rifleman publication, an Alaskan guide was forced to draw his Smith & Wesson 3953 DAO 9mm and use it to defend his clients from an aggressive male bear.

He tries to de-escalate the situation

A big thing to note in this story is the guide is not at all interested in shooting bears. He admits he’s had to on several occasions but, in general, he usually sees sows and their cubs as much more of a threat than males.

When confronted by a male bear, he attempts to scare it off. That appears to work until the bear targets his clients.

He waits until he has a clear line of fire

Reviewing this article, it’s apparent that he values the safety of his clients. He doesn’t just immediately open fire when the bear advances. Instead, he waits until the bear stops his charge and provides a static target. From then on out, it’s bullets on target.

In the case of a bear, center mass with a 9mm isn’t going to do much. Vital areas such as the brain and head do more to dissuade a bear from advancing. Bears are not going to go down easy. They don’t understand they’ve been shot. They understand pain but do not “get it” that bullets are hitting them.

The guide paints a clear picture he attributes a certain amount of his success to the ammunition he used. Buffalo Bore 9mm +P Outdoorsman 147-grain was his ammunition of choice. The expansion of the round when it enters soft tissue and the added penetration of overpressurized rounds makes this a lethal choice for both concealed carry and the wilderness.

An interesting note is that the guide, Phil Shoemaker pointed out he normally carries a .44 magnum. He carried one for 25 years and recently switched to a 9mm with Buffalo Bore. The change could have something to do with the ease of carrying, the additional magazine capacity, or his personal assessment: self-defense rounds have the capability to match a standard .44 magnum round.

The take-away from this: the same lessons that apply to an Alaskan Bushman in the wilderness can and should be applied to concealed carriers. Our opponent may walk on two instead of four, but we must be prepared to defend ourselves, our property, and our family the same.

Previous article: #DIGTHERIG - Martin and his Glock 27 and Glock 23 in Raw Dog Tactical Holsters Next article: Truck Owner Tries To Stop Car Thief, Gets Knife Pulled On Him -- Has A Gun