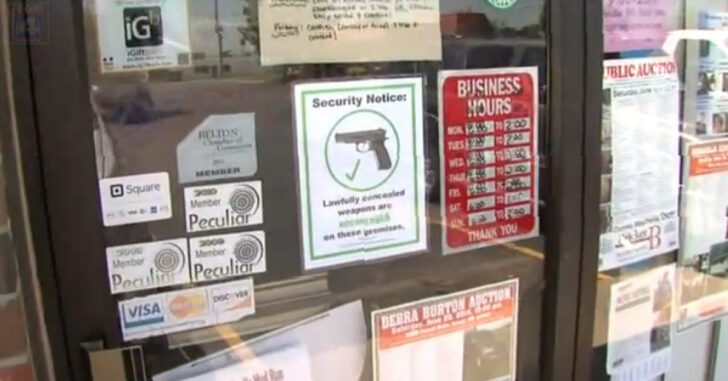 PECULIAR, MISSOURI — A small “cash only” cafe located in a rural farming community is taking a bold new stance on self-defense. Katie’s Cafe put up a sign reading, “lawfully permitted weapons are encouraged on these premises.” It’s one added step towards letting patrons and potential bad guys know that people inside are armed and prepared.

“If people are worried about somebody having a gun and carrying it illegally, coming in and trying to start something, maybe that will deter them from starting anything, or trying anything,” said Dan Vest, a regular customer of the cafe.

Makes sense, right? Everything’s done in cash in this little quaint cafe adjacent to farmlands. The real question: why isn’t this the norm?

What is the worst that happens if a store puts up a sign saying it encourages lawful carrying of handguns and firearms? Does it affect business detrimentally for people to know there are others amongst them who will come to their defense?

Here’s the thing: stores used to be communal spots where people congregated, talked, and broke bread together over a cup of coffee. When did that change to restricting firearms?

People have become unreasonably fearful of guns and irrationally afraid of taking responsibility for their own actions. It’s something encouraged in nearly every quadrant of mainstream society.

Looking at older versions of our society, there was never a guarantee of safety presented when you stepped foot outside the door. Police were there to keep civil order and enforce laws and, when the occasion presented itself, help a kitten out of a tree. But the idea that police can be omnipresent to protect everyone, everywhere — where the heck did this idea spring up from? It’s not even realistic.

The most realistic approach to business and places where people congregate is to simply give people the option of deciding their own level of protection. If a concealed handgun brings a peace of mind to someone shopping for a few candies in the middle of the day, then so be it. There’s no need to restrict that person’s movement so long as they act in a law-abiding manner.

That’s the crux of all concealed carry activity: responsibility, accountability, and safety.

This business owner gets it. How many others need to?

Previous article: Less Lethal Weapons for the Armed Citizen Part II: Options Next article: Here Is How I Want The Next Mass Shooting To Go