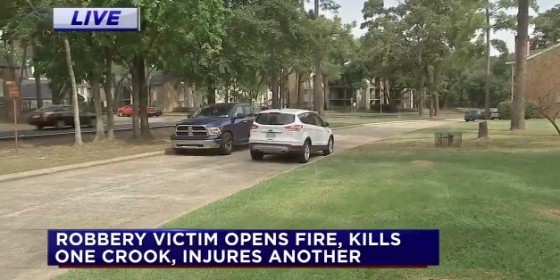 HOUSTON, TEXAS — One attempted robbery suspect is dead and another is injured after they encountered an armed citizen who they thought was going to be their victim.

A man was walking down the road around 1am Friday when he was approached by two men looking to rob him. Police say that’s when the man pulled out a firearm and began to shoot at the suspects.

One of those suspects died at the scene. The second suspect was found injured a short time later and taken to the hospital.

There is no word on whether or not the armed man will be charged with any crime, but it doesn’t seem to be the case. And for that, we’re filing this under CCW In Action.

Previous article: [VIDEO] The Most Comfortable Way To Carry A Concealed Firearm Next article: Whoa, Hold Up! What Do You MEAN Guns Save Lives In California?!