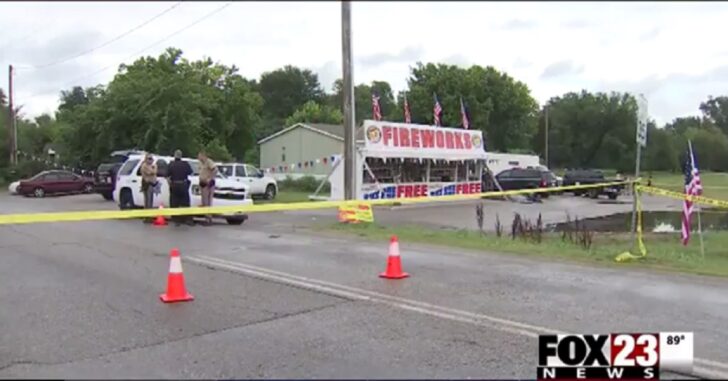 TULSA COUNTY, OK — We previously reported on a man who was killed during the robbery of a fireworks stand in Oklahoma. During an attempt at stealing a large amount of fireworks, 15-year-old Jake Ulrich was killed by the son of the stand’s owner, 32-year-old Johnny Mize Jr.

Although some would argue that the exchange of gunfire over the theft of approximately $600 worth of fireworks is outrageous (and it is), the blame for the fight has been very much in question.

Investigators say (the robbers) were armed when they approached the fireworks stand around 11:30 a.m. Tuesday. The suspects then allegedly grabbed a box of fireworks worth $600 and ran away.

The stand’s owner said the robbers fired a shot first, so his son fired back. Deputies say the son ran after two men and jumped into the bed of their truck. Authorities say the shooter’s father got into his car and followed the truck to 65th and Edison where deputies say the surviving person of interest ran away empty-handed.

It would seem that either the son was incorrect concerning his claim that the robbers fired a shot first, or the Tulsa County District Attorney’s Office has an odd sense of justice — Mize Jr. has been charged with first-degree manslaughter.

According to the Mize Jr.’s defense attorney, the charge is an egregious error, and one that punishes the wrong party.

“I cannot believe they did this to the Mize family,” defense attorney Kevin Adams said according to Tulsa World.

“It’s mind-blowing that this is the decision they’ve decided to make.”

Adams and his co-counsel, Stephen Lee, will represent the Mize family whether or not they can afford their rates because “this case is that outrageous” and that “some nerd with a law degree” should tell working-class folks how to defend their businesses, according to Tulsa World.

We will have to see what the courts decide.

Previous article: #DIGTHERIG - Jeff and his Smith & Wesson .38 Special in a JM4 Tactical Holster Next article: Thuggary Doesn't Pay Off; Robber Shot With His Own Gun By 60-Year-Old Victim