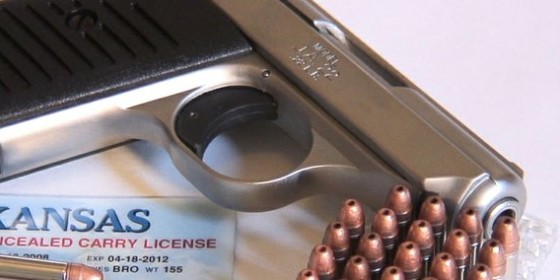 “Gov. Sam Brownback plans to sign a bill allowing Kansas residents to carry concealed firearms without a permit,” 2ljworld.com reports. “The Republican governor’s office scheduled a signing ceremony for Thursday afternoon at the Statehouse. Legislators approved the measure last week.” As Kansas is already an open carry state, the removal of a mandatory concealed carry permit puts the Sunflower State in the Constitutional Carry column, the fifth state on the list. “Kansas still will issue permits for gun owners who want to carry concealed in other states that recognize Kansas permits. A person seeking a Kansas permit must undergo eight hours of firearms training.” Want to hear anti-CC Democrats whining? You know you do . . .

Senate Minority Leader Anthony Hensley, D-Topeka, [told cjonline.com that] too many questions about consequences of the legislation weren’t satisfactorily answered by state lawmakers or gun-rights lobbyists.

“Will this bill put people in unnecessary danger?” he said. “Will our state’s business community be adversely affected by way of unneeded liability or potential higher insurance costs? And, could this bill lead to business owners being forced to ban any and all firearms, including concealed firearms currently allowed by law?”

No, no and no. But for gun rights advocates the passage of Senate Bill 45 into law is a big, When Harry Met Sally-style YES! Winning!