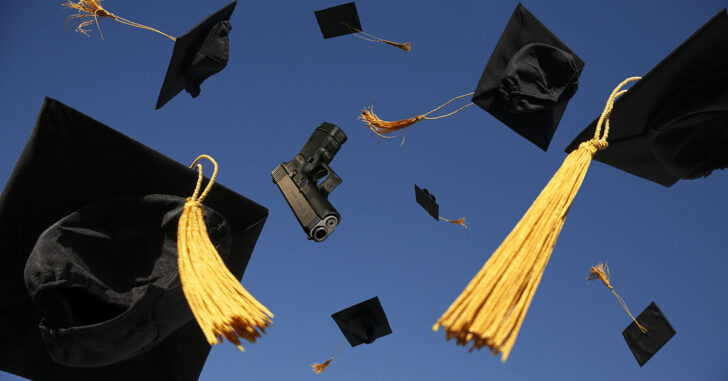 AUGUSTA, KS — Augusta High School seniors in Augusta, KS got one last lesson at their graduation ceremony: What not to do when you get your concealed carry license.

In what Augusta Police Chief Tyler Brewer described as a “knucklehead situation,” a concealed carry licensee injured himself and another when he negligently discharged his firearm which was safely idiotically tucked away in his sock.

As he “adjusted” his sock, the firearm discharged, sending a bullet through the man’s foot and into the calf of a woman approximately 50 feet away. Neither party’s injuries were considered life-threatening and the woman has already been released from the hospital.

Somehow, the majority of the people in attendance at the ceremony were unaware of the incident and the ceremony continued.

Chief Brewer will be presenting the case to prosecutors on the grounds that it is unlawful to carry a firearm on school grounds.

As with every unfortunate concealed carry incident, there are lessons to be learned.

First: Always carry your firearm in an appropriate holster, one that not only supports the firearm enough to keep it from moving unless the carrier intends it to, but also covers the trigger to prevent a negligent discharge. Just in case there’s some confusion… a sock does not qualify.